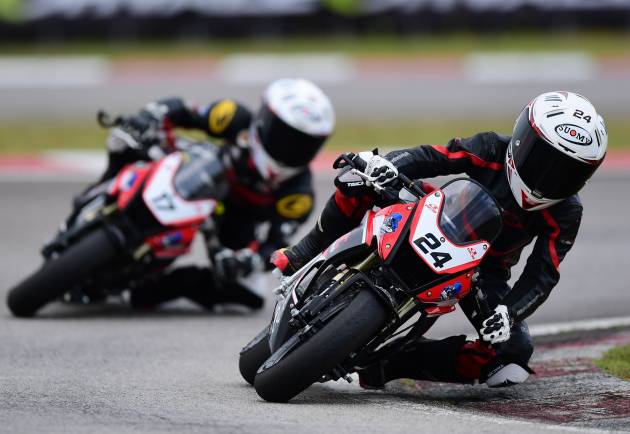 At the conclusion of rounds 1 and 2 of the 2021 FIM MiniGP Malaysia, held at the Sepang Go-Kart track, Emil Idzhar Ezuan (racing number #25) of Selangor is on top with 75 points in four races. He is followed by Farres Putra Mohammad Fadhill (#23) with 70 points and Muhammad Farish Hafiy (#20) with 56 points, both also hailing from Selangor.

Emil and Farres won a race apiece in round 1 and 2 with Farish showing strongly with a second place in race 2 of round 1 and race 1 of round 2. Unfortunately both Farres and Farish failed to finish race 2 in round 2, giving Emil the full 25 points for a race win, run across 20 laps, in the MiniGP category.

For the SIC Oval Junior Championship, or 110 cc category, Qabil Irfan (#1) of Terengganu made a clean sweep of the weekend’s double header, winning all four 15 lap races, giving him the championship lead with 100 points. Meanwhile, Shah Putra (#12) of Negeri Sembilan and Adam Danial (#3) of Terengganu fought it out for second and third place, finishing the weekend with two second places apiece and 72 and 66 points in the championship respectively.

Commenting on the racing over the weekend, Sepang International Circuit (SIC) chief executive officer Azhan Shafriman said there was a marked difference in the level of competition over two days. “We can see that in race 2, the riders were really competitive and going for the win,” said Shafriman, “and on Sunday they were fighting hard for the podium places. We hope to see this continue for races 3 and 4 in the coming weekend of October 23.”