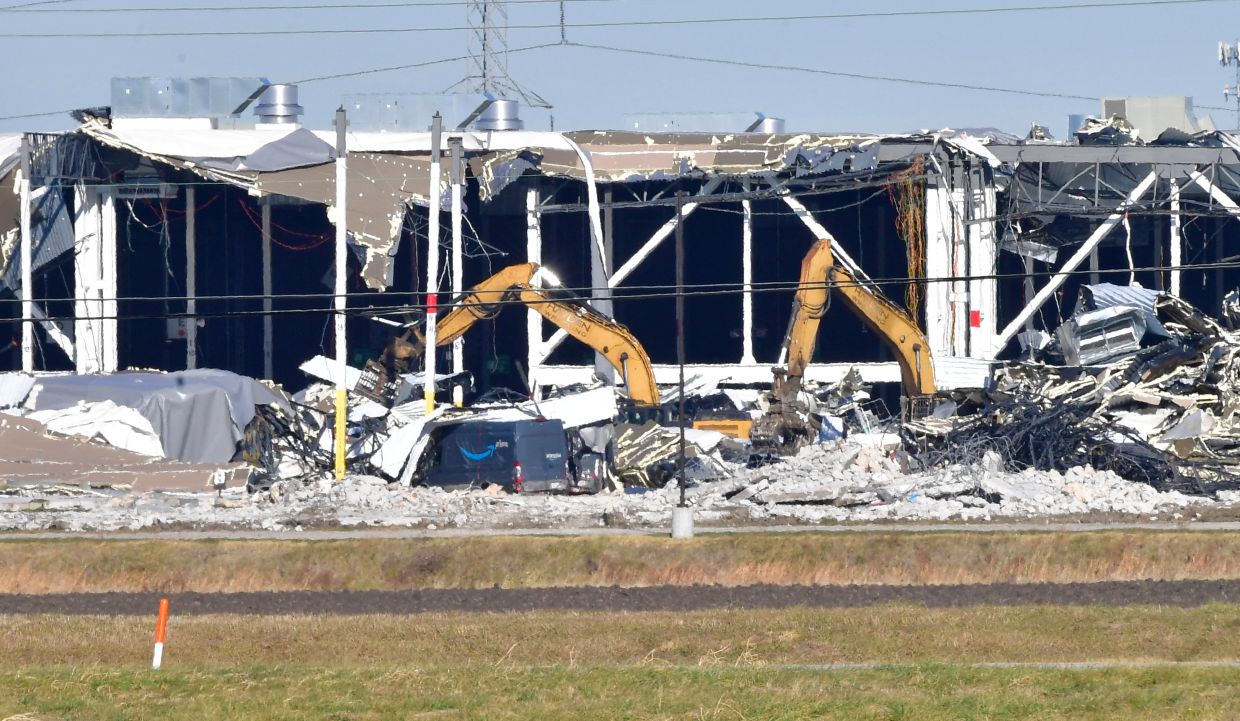 The messages between an Amazon.com Inc delivery driver and her boss began about 80 minutes before a tornado struck one of the company’s warehouses in Edwardsville, Illinois, on Dec 10, killing six workers. The dramatic exchange cast in sharp relief the chaos that can ensue when disaster hits and disagreements erupt about when it’s time to heed warnings and cease working.

“Radio’s been going off,” the driver wrote in a text obtained by Bloomberg News.

“Keep delivering,” came the response from her supervisor. “We can’t just call people back for a warning unless Amazon tells us to.”

The driver suggested she return to base. But her boss warned that doing so could get her fired for failing to complete her deliveries. She fretted that her van would wind up becoming her casket.

Days after the tornado toppled the warehouse’s 11in thick concrete walls, workers are questioning Amazon’s commitment to their safety. Bloomberg reviewed text messages from contract drivers and interviewed current and former workers who said they received instructions on what to do in fires or tornadoes, but never did the kind of drills that could help avoid confusion in an emergency. Training for new hires entails merely pointing out emergency exits and assembly points, they said.

Driver: Radios been going off.

Dispatch: OK. Just keep driving. We can’t just call people back for a warning unless Amazon tells us to do so.

Driver: Just relaying in case y’all didn’t hear it over there.

Driver: Tornado alarms are going off over here.

Dispatch: Just keep delivering for now. We have to wait for word from Amazon. If we need to bring people back, the decision will ultimately be up to them. I will let you know if the situation changes at all. I’m talking with them now about it.

Driver: How about for my own personal safety, I’m going to head back. Having alarms going off next to me and nothing but locked building around me isn’t sheltering in place. That’s wanting to turn this van into a casket. Hour left of delivery time. And if you look at the radar, the worst of the storm is going to be right on top of me in 30 minutes.

Driver: It was actual sirens.

Dispatch: “If you decided to come back, that choice is yours. But I can tell you it won’t be viewed as for your own safety. The safest practice is to stay exactly where you are. If you decide to return with your packages, it will be viewed as you refusing your route, which will ultimately end with you not having a job come tomorrow morning. The sirens are just a warning.

Driver: I’m literally stuck in this damn van without a safe place to go with a tornado on the ground.

Dispatch: I will know when they say anything else to me.

Amazon, which has been opening warehouses by the hundreds in the past few years, says the Edwardsville facility complied with all construction regulations and that proper safety procedures were followed when the tornado struck. The company says its people followed federal guidance to take shelter immediately when there’s a tornado warning and likely saved many lives. But in the end, workers who bunkered in a designated safe zone survived, while six others perished after being stranded on the end of the facility that bore the brunt of the storm.

A person familiar with the situation confirmed the authenticity of the texts between the driver and her boss. The driver, this person said, was about 30 miles away from the cluster of facilities Amazon operates in Edwardsville and worked out of a delivery station across the highway from the building that was decimated by the tornado.

“This was a developing situation across a broad geographic area, and unfortunately the delivery service partner’s dispatcher didn’t follow the standard safety practice,” Amazon spokesperson Kelly Nantel said in a statement.

“This dispatcher should have immediately directed the driver to seek shelter when the driver reported hearing tornado sirens. While this text exchange was going on, the local Amazon team was ensuring each delivery service partner had directed their drivers to shelter in place or seek shelter and advised them to stop delivering for the evening. We’re glad the driver is safe and we’re using the learnings from this incident to improve our policies and guidance for delivery service partners and drivers. Under no circumstance should the dispatcher have threatened the driver’s employment, and we’re investigating the full details of this incident and will take any necessary action.”

Even as Amazon undertakes an investigation of what happened that evening in Edwardsville, the US Occupational Safety and Health Administration has opened its own probe into the deaths. Disaster planning should include training drivers what to do if they are caught outdoors when a tornado is threatening, according to OSHA guidelines, which advise seeking shelter in a basement or a sturdy building or remaining in the vehicle if debris is flying. Meanwhile, Illinois Governor J.B. Pritzker said building codes may need to be toughened as storms become more frequent and deadly.

The US federal government doesn’t require warehouses in tornado-prone areas to train and drill workers or provide shelters. OSHA does require workplaces to have an emergency plan, which could include preparing for a tornado.

Amazon workers in Edwardsville and beyond said their weather safety training was minimal.

An employee at a fulfillment center across the street from the wrecked warehouse said that new hires get instructions on fire and tornado preparedness and information during so-called stand-up meetings with managers. The employee, who requested anonymity to speak without company authorisation, didn’t recall receiving information on a tornado – at least since the pandemic began – and said that workers never physically practice the drills.

A former Amazon manager who worked for two years at a fulfillment center across the street from the collapsed warehouse said the company conducted no fire or tornado drills. Upper managers provided small plastic cards with instructions on what to do during a tornado, including taking shelter but not getting in cars or leaving the area. Shelter, in some cases, meant a bathroom, the manager said.

“I would not know what to do with a tornado at all,” said this person, who left Amazon this year and requested anonymity to avoid angering the company. “No one knew where they were supposed to be going.”

An employee at a Midwestern Amazon warehouse who trains new hires said he has recommended several times that the company conduct fire and tornado drills. The person, who requested anonymity to protect his job, said he floated the ideas via an electronic employee forum and on a white board where workers offer suggestions. Nothing happened, the person said.

Beth Gutelius, research director at the University of Illinois at Chicago’s Center for Urban Economic Development, said that Amazon warehouses typically have an intense pace, employees come and go swiftly and there are many contractors – particularly amid the holiday season. Drivers typically work for separate companies known as delivery service partners that take their directions from Amazon.

“Between the contractors and rate of turnover, between the number of temporary workers and churn, it raises questions about how well prepared any of those workers were for an emergency event like this,” she said.

Amazon says emergency response training is provided to new employees and is reinforced throughout the year. Company buildings have site-specific emergency action plans that identify exit routes and shelter areas, Amazon says. The company also says there are multiple trainings related to safety and emergency action plans that all employees are required to take initially upon being hired and on an annual basis.

Such training is increasingly important as large tornado outbreaks happen more frequently. An analysis in November of “atmospheric ingredients” that can produce tornadoes found they occur as much as 20% more often for every degree Celsius of warming. The study by Columbia University researchers concludes that all the extra heat “will affect the occurrence of conditions favourable to severe weather”.

The Edwardsville tornado touched down near a highway interchange at 8.28pm and intensified as it approached the Amazon facility. It carved a 9,600-yard swath more than 3.5 miles long, with peak winds of 150 miles per hour, hurling cars and toppling power lines. The tornado was one of more than 30 that tore through Illinois and five other US states Friday and Saturday, leaving a trail of destruction over hundreds of miles and killing at least 88 people in all. The small town of Mayfield, Kentucky, was obliterated and 74 people died in the state.

“There’s probably 100 or more of these massive warehouse buildings around here and it’s hard to grasp how big they are,” Tony Smallmon, a St. Louis commercial real estate broker. “It’s very easy to get disoriented in those buildings, even if you work there.”

Matt Belcher, principal at St. Louis-based building code compliance firm, Verdatek Solutions, said it’s up to the owner or tenant of a building to build tornado shelters. “There really isn’t any requirement to put tornado shelters inside the building,” said Belcher who also builds houses, offices and apartments. “The code is a minimum standard. It doesn’t preclude you from doing it. It just isn’t required.”

Amazon spokeswoman Nantel said at a news conference with Pritzker that warehouse leaders used bullhorns and radios to move people in minutes to safer locations. They are on either end of the 1.1-million-square-foot building and have no windows, she said.

Of the 46 people in the building Friday night, 39 took cover on the north side, which was nearly undamaged. Seven may have gone to the south side, because of the work they were doing at the time, Nantel said. The tornado made a direct hit there, leaving piles of twisted metal and toppling sections of the 40-foot-high concrete wall panels.

Existing standards generally require buildings to withstand winds of about 100mph. But tornadoes are often more powerful – the one that tore through the Amazon building was a category EF3, which means winds of 136mph to 165mph.

Pritzker said that current regulations may be inadequate.

“People have said that they were built to code,” he said Dec 14. “If they were, then we need to look – and I’ve talked to legislators about this – we need to look at whether the code needs to be strengthened.”

The structural integrity of warehouses with so-called tilt-up walls can be compromised if one section collapses, bringing down the rest of the building “like a house of cards”, said Jamshid Mohammadi, professor of civil and architectural engineering at the Illinois Institute of Technology in Chicago.

“That’s why internal shelters are so important,” he said. – Bloomberg