BTS were all over the American Music Awards on Sunday (Nov 21, US time), performing with Coldplay on a raucous My Universe and taking home three big awards – artiste of the year, favourite pop duo or group and favourite pop song for Butter.

“Seven boys from Korea, united by love of music, met the love and support from all the armies all over the world,” said RM. “This whole thing is a miracle. Seriously, we would never take this for granted.”

The show celebrated the best popular music for a second pandemic year with a mix of live and pre-taped performances.

Silk Sonic’s Bruno Mars and Anderson.Paak kicked off the awards on a funky, R&B and pre-taped note with their Smokin Out The Window and Jennifer Lopez pre-taped her On My Way from her upcoming romantic comedy Marry Me. 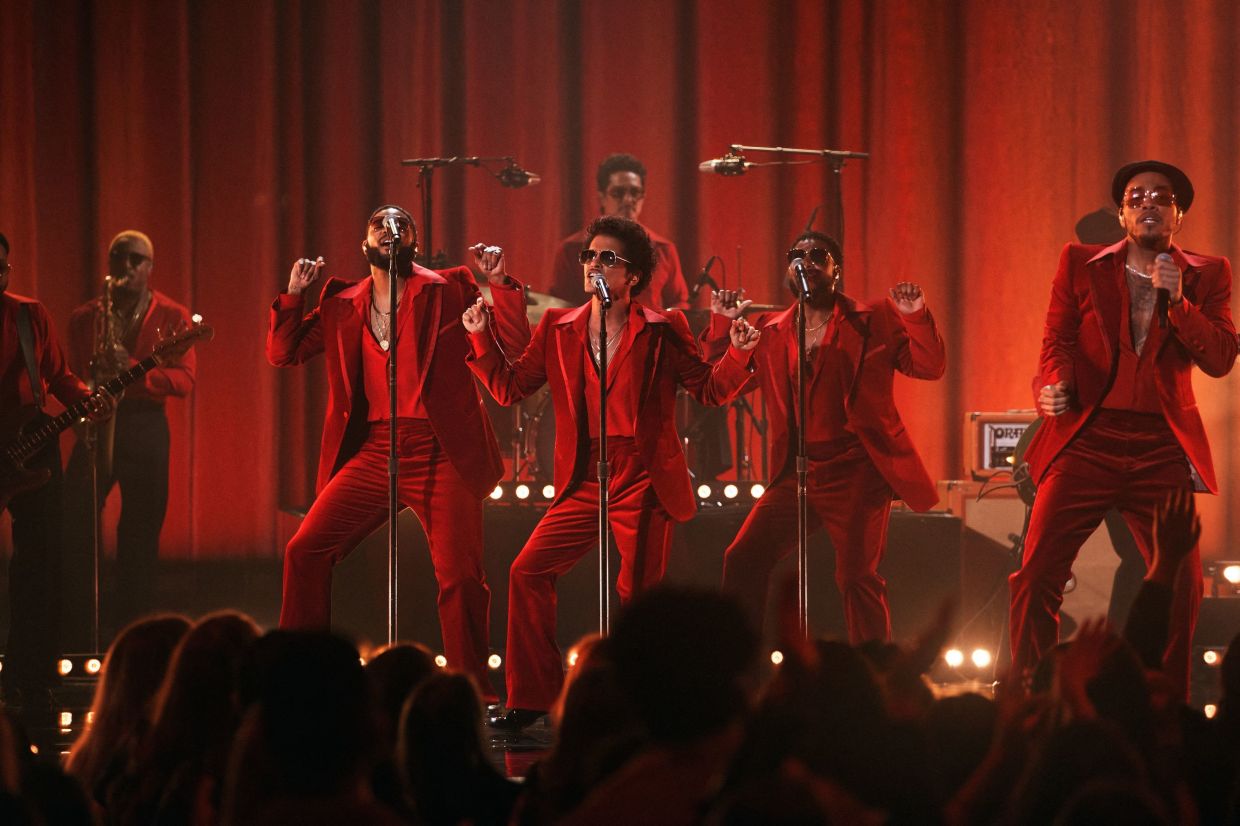 An earlier scheduled performance of Butter by BTS and Megan Thee Stallion was scrapped after the rapper cited personal reasons for dropping out Saturday.

She turned out a big winner: named favourite female hip-hop artiste, her Good News winning for favourite hip-hop album and her Body was crowned favourite trending song, a new award this year.

Olivia Rodrigo’s bid to turn her album Sour into something very sweet was facing trouble.

She entered the night as the leading nominee with seven nods but late into the show only could win new artiste of the year.

She lost favourite pop album to Taylor Swift’s evermore. In a taped speech, Swift told her fans: “I’m so lucky to be in your life.”

Rodrigo performed her hit traitor live on a stage covered with flowers and Carrie Underwood and Jason Aldean brought a little country to the stage when they sang their pre-taped duet If I Didn’t Love You. 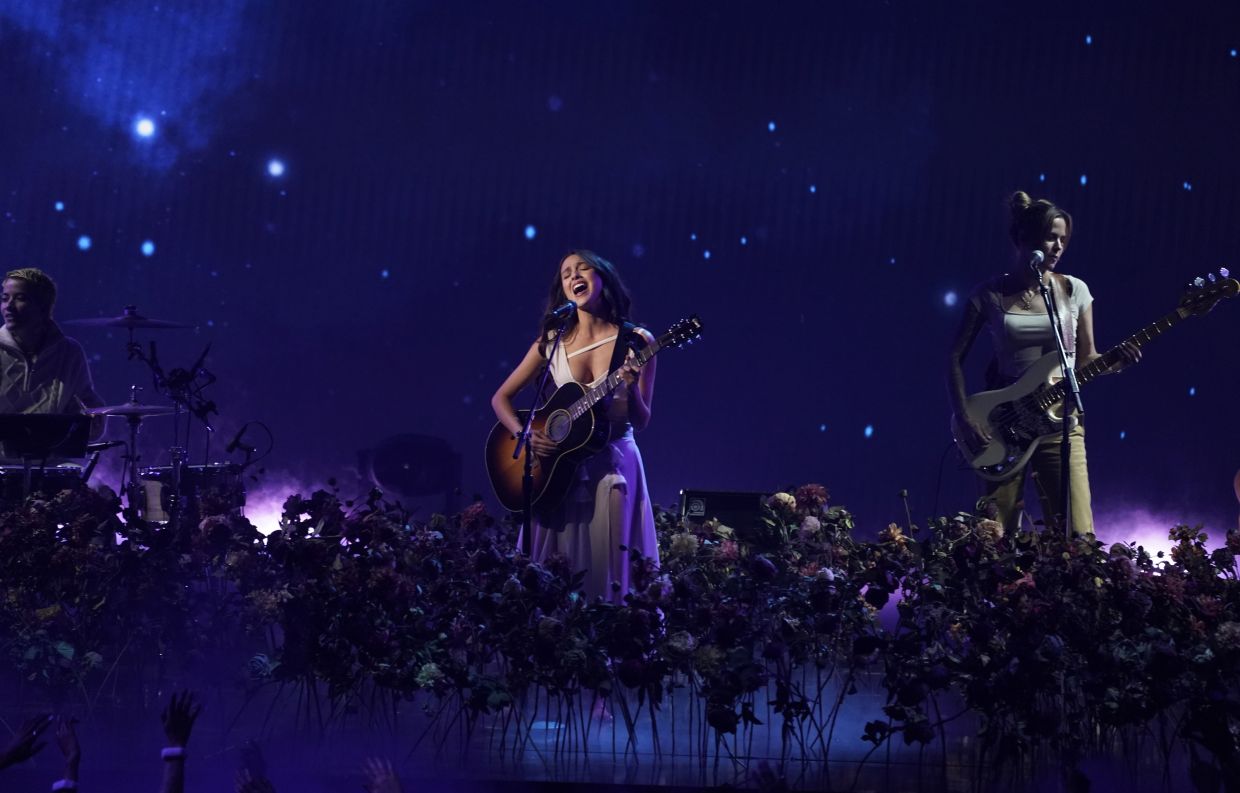 Among live performances, Italian band Måneskin made their US awards show debut with their viral hit Beggin’.

Chlöe of Chloe x Halle floated down onto the stage to perform her hit debut single as a soloist Have Mercy, swinging her hair and twerking.

Mickey Guyton got loud cheers while singing her patriotic song All American in a silvery dress, periodically screaming out “How y’all doing?”

The fan-voted awards show was airing live from Los Angeles on ABC. 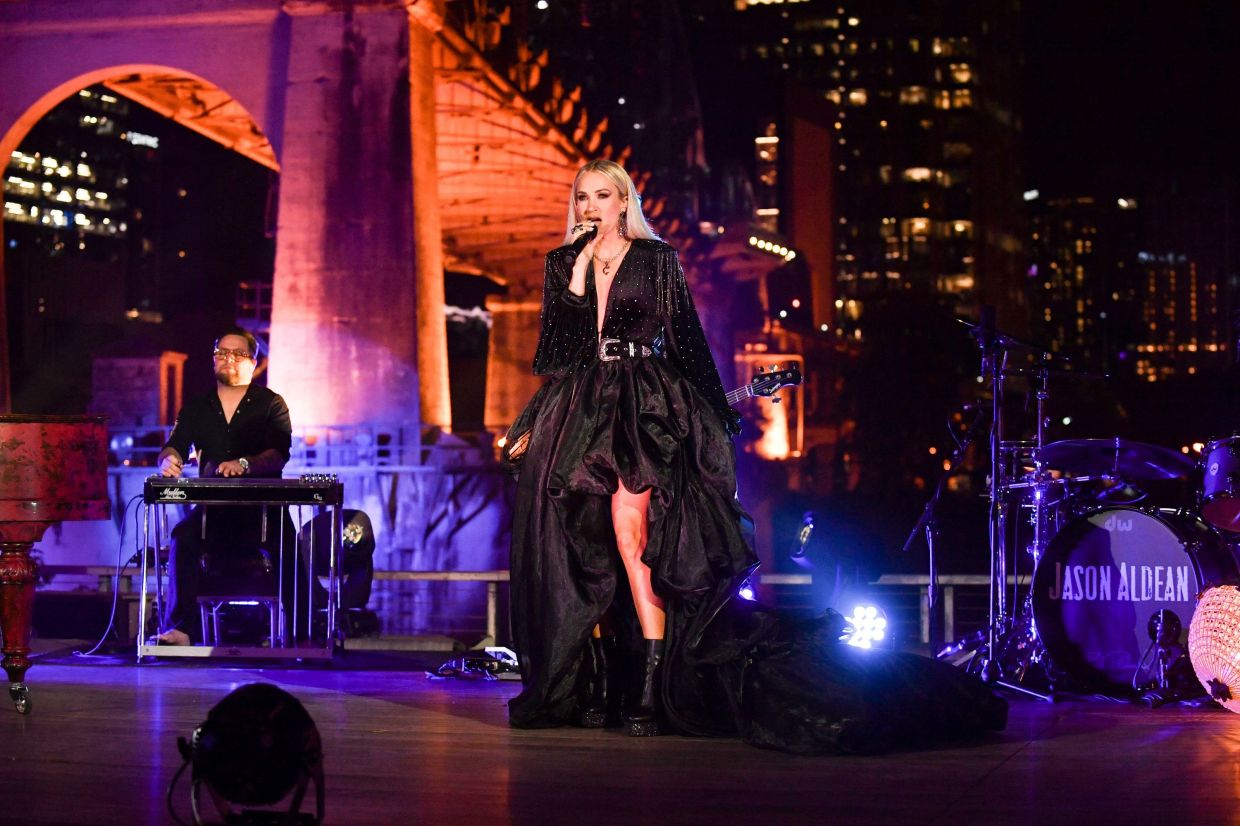 Nominees were based on streaming, album and digital sales, radio airplay and social activity, and reflect the time period of Sept 25, 2020, through Sept 23, 2021.

Producers this year said they would be trying be highlighting everyone’s home town.

Becky G won for favourite female Latin artists and thanked the Latinx community. “You are not alone,” she said. “We are the American dream.”

Machine Gun Kelly grabbed the favourite rock artist award. “I want to accept this for all the aspiring musicians, the one who desires to play an instrument, wants to rap, wants to sing – not just the rock artists, but all the artists,” he said.

Earlier, in awards announced before the show, Swift was named favourite female pop artist, Ed Sheeran got the favourite male award and Doja Cat featuring SZA on Kiss Me More was named collaboration of the year. 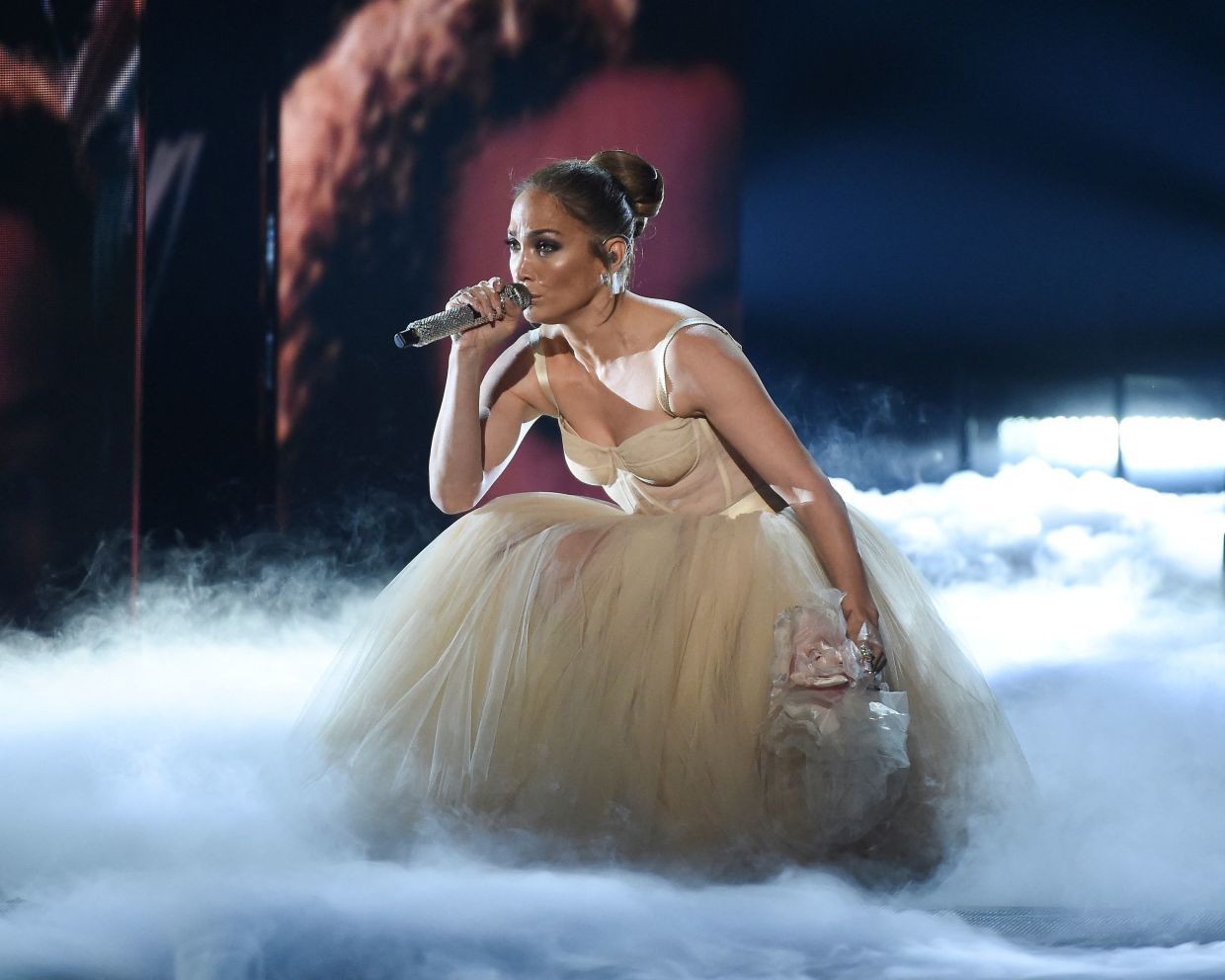 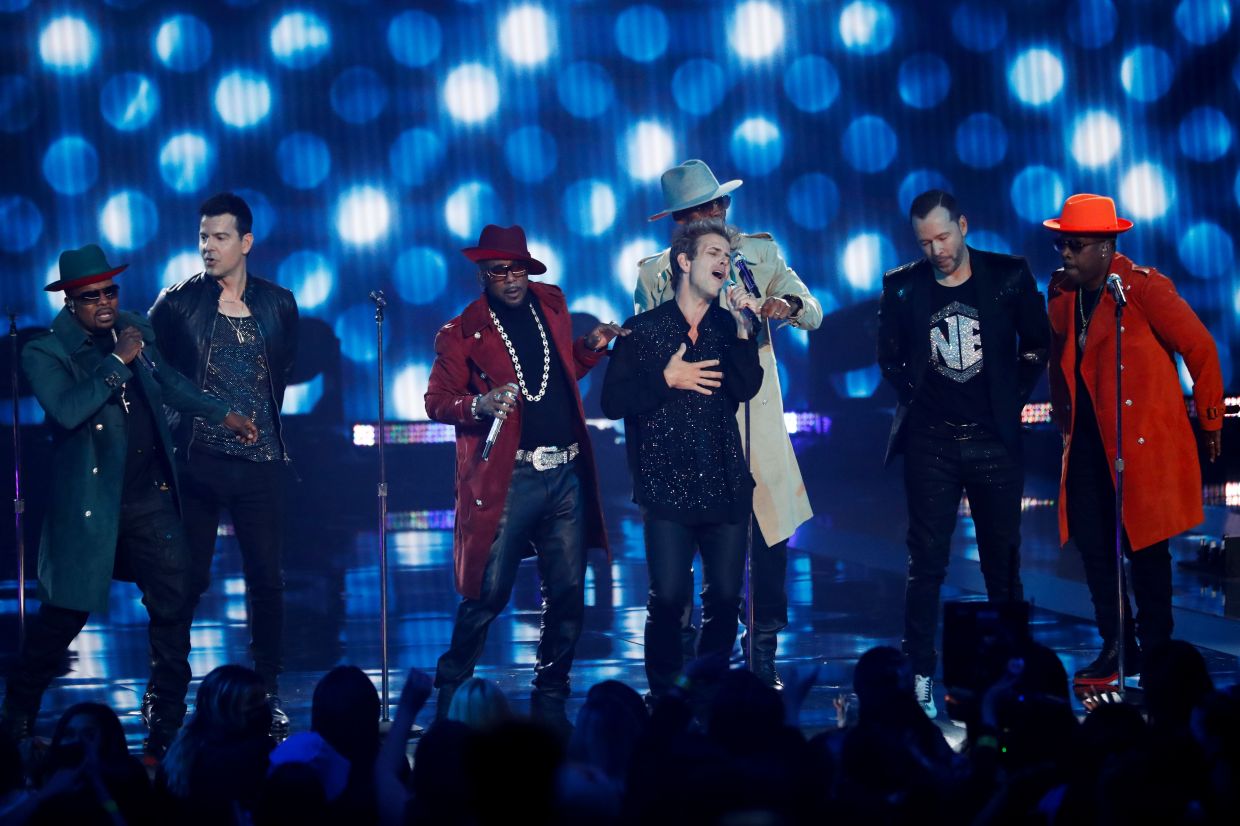 New Kids on the Block and New Edition performing on stage of the awards show. Photo: Reuters

For the older viewers, New Edition and New Kids on the Block performed together.

The Boston-based groups took turns with the hits, trading hits: You Got It (The Right Stuff), Candy Girl, Step By Step, Mr. Telephone Man and uniting for Can You Stand the Rain, Is This The End, Hangin’ Tough and If It Isn’t Love. 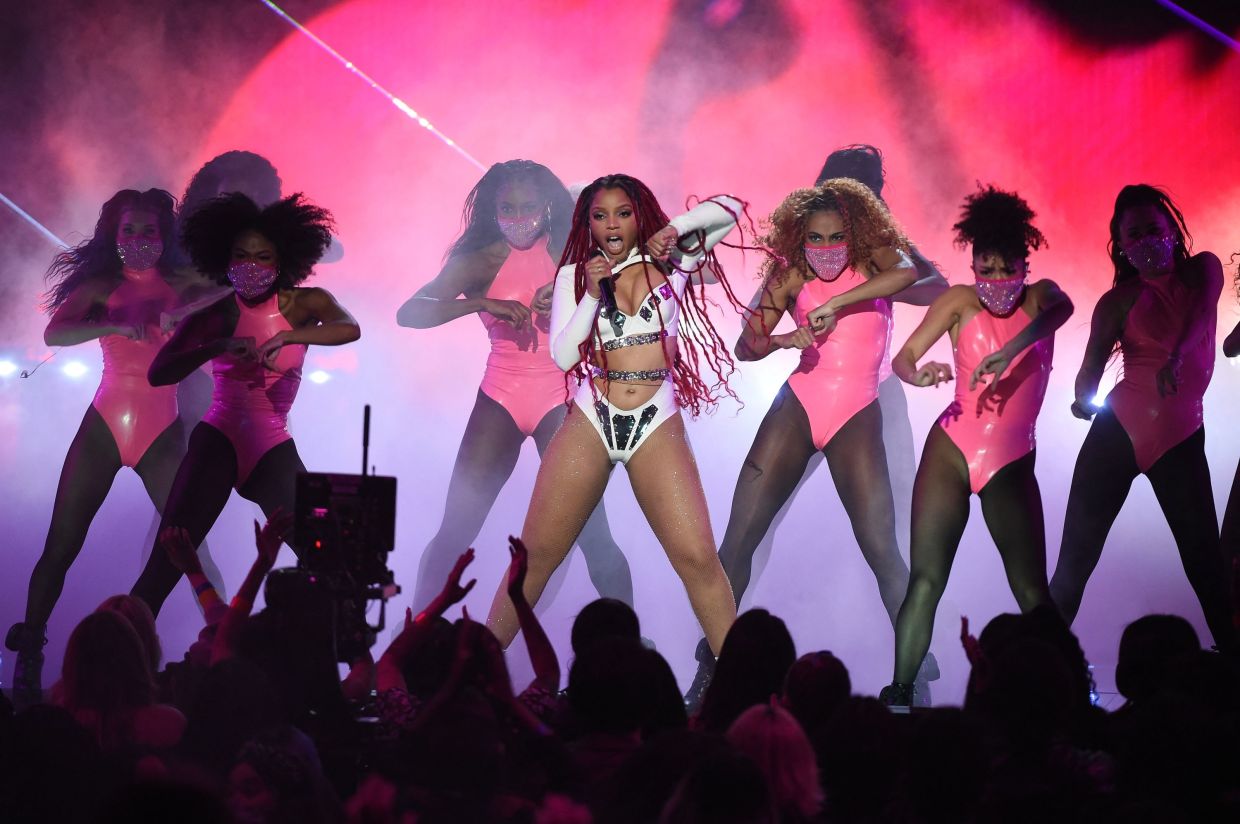 Rapper Pop Smoke, who was killed in 2020, was nominated in three categories but didn’t manage to win any posthumously.

Host Cardi B, wearing a constant stream of new outfits, revved up the crowd. Later her song Up was named favourite hip-hop song. – AP