Austria’s ruling coalition soldiers on after fight to near-death 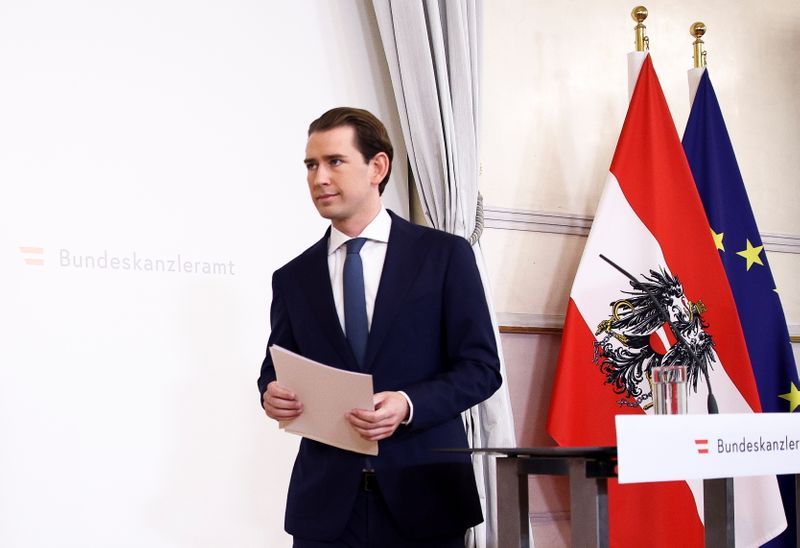 VIENNA (Reuters) – Austria’s ruling coalition soldiered on on Sunday after Chancellor Sebastian Kurz quit https://www.reuters.com/world/europe/austrias-kurz-says-stepping-down-chancellor-2021-10-09 to keep it alive, but a top newspaper likened his future role in parliament to Russian leader Vladimir Putin’s stint as prime minister in name only.

Prosecutors placed Kurz under investigation https://www.reuters.com/world/europe/prosecutors-raid-austrian-conservatives-hq-fresh-headache-kurz-2021-10-06 last week on suspicion of corruption. Kurz denies wrongdoing but embarrassing text-message exchanges that are part of the investigation and have been published in Austrian media have already done serious political damage.

The junior coalition party, the Greens, had demanded Kurz’s head over the investigation and said they were now satisfied after Kurz’s announcement on Saturday evening he was stepping down. However Kurz, 35, will remain leader of his conservative party and become its top lawmaker, positions in which he can keep calling the shots in government.

Kurz’s designated successor is Foreign Minister Alexander Schallenberg, a career diplomat and relative political novice but also a close ally of Kurz’s and defender of his hard line on immigration. Schallenberg was due to meet Greens leader and Vice Chancellor Werner Kogler and Austrian President Alexander Van der Bellen on Sunday.

“This tactical manoeuvre is reminiscent of Russian President Vladimir Putin, who gave way to Dmitry Medvedev only to take over again,” influential tabloid daily Kronen Zeitung said in an analysis, adding that Kurz only planned to leave the top job for a limited time.

Putin, who had been president from 2000, was prime minister under Medvedev in 2008-2012 and then returned to the presidency. A leaked U.S. diplomatic cable at the time said Medvedev “plays Robin to Putin’s Batman”.

Kurz made no mention of a time limit on his departure from the Chancellery but he said he planned to fight the allegations against him, leaving open whether he plans to return.

It is also unclear how badly the spat has damaged the coalition.

Kurz has been undisputed within his party, the biggest in parliament, until now and was reappointed with 99.4% support in August.

“Sebastian Kurz is chancellor in the shadows,” the leader of the opposition Social Democrats, Pamela Rendi-Wagner, told a news conference on Saturday night, adding that Kurz would “continue to pull the strings”.

A star among Europe’s conservatives known for his hard line on immigration, Kurz became one of the continent’s youngest leaders in 2017 when he formed a coalition with the far-right Freedom Party that collapsed in scandal in 2019. Parliament sacked him but he won the snap election that followed.