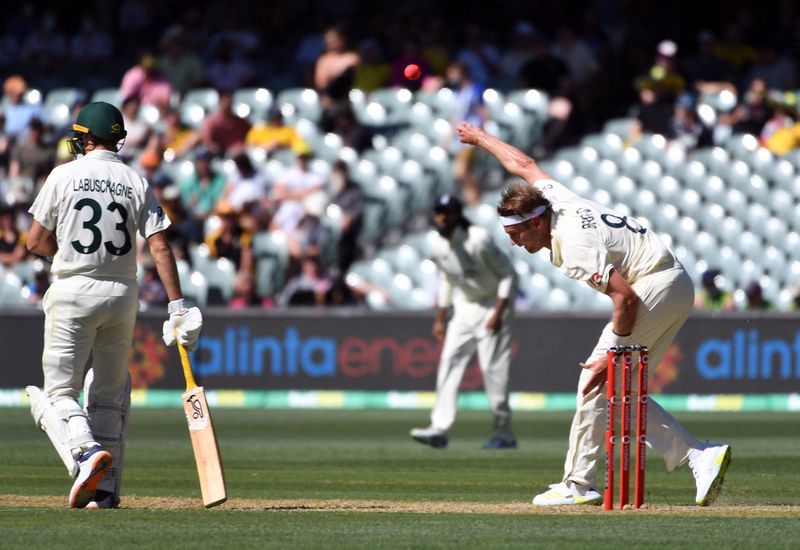 ADELAIDE (Reuters) – Australia, missing regular skipper Pat Cummins, laboured to 45 for one after an intriguing first session in the day-night second Ashes test against England on Thursday.

The hosts were jolted even before the pink-ball test got underway at Adelaide Oval with Cummins forced out after being identified as a close contact of a positive COVID-19 case.

His deputy Steve Smith regained the captaincy for the first time since the 2018 Newlands ball-tampering scandal but Australia were under early pressure after he won the toss and elected to bat.

David Warner was batting after a nervy 20 at the dinner break, while Marnus Labuschagne was on 16.

Recalled strike bowler Stuart Broad tormented Warner, who survived a strong lbw appeal and was repeatedly beaten by the seamer.

It seemed only a matter time before the first wicket would fall and Broad got the breakthrough, removing opener Marcus Harris for just three runs via a cracking catch from Jos Buttler.

It took 18 balls before a run was struck, the first 10 overs yielding just 11 runs.

The visitors, fielding close in, had Australia pinned down throughout the opening two hours but were unable to take more wickets and burned two reviews trying to dismiss Warner.

Australia lead the series 1-0 after their nine-wicket win in Brisbane.