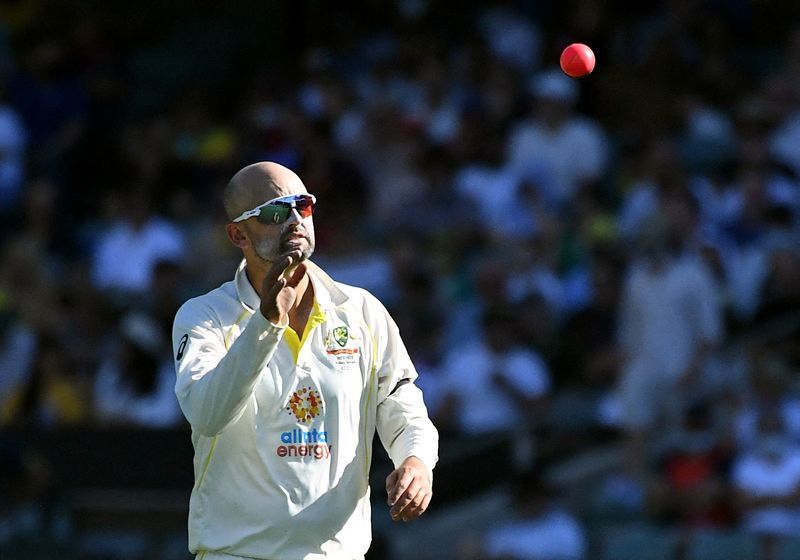 ADELAIDE (Reuters) – England would be justified in wishing Nathan Lyon had opted for an inside table at an Adelaide restaurant on Wednesday after the veteran Australian spinner wrecked Joe Root’s team in the day-night second Ashes test on Saturday.

Australia’s regular skipper Pat Cummins missed the pink-ball contest after being a close contact of a positive COVID-19 case having dined at the same restaurant.

While Cummins dined inside, Lyon opted for an outside seat and escaped South Australia’s strict COVID-19 protocols that ruled out his captain.

Australia are also without the injured Josh Hazlewood but Lyon and Mitchell Star shared seven wickets between them as they bundled out England for 236 to put the hosts in the box seat.

While the 34-year-old off-spinner was always going to be one of the first names on the team sheet, the absence of the frontline quicks placed him more front and centre than ever.

“Nathan is a fantastic first-class bowler, he has been world class for a long side,” Starc said. “He knows what he is doing no matter what the colour of the ball.”

Joe Root and Dawid Malan forged a 138-run stand to frustrate Australia in the wicketless first session and Lyon played a key role after the dinner break as Australia took charge of the contest.

“For us quicks to bowl in partnership with him was pretty key in how we went in the second session,” Starc said. “He is a big part of our bowling attack.”

Malan too took time to praise Lyon post-match as “a fantastic player”.