Both companies and the customers they serve are becoming extremely aware that it doesn’t matter how much is spent to enhance other aspects of the business, if the firm’s data security approach is lax.

That’s the takeaway from a new survey of 13,000 respondents by Okta and YouGov, which finds digital trust in businesses remains “fragile”, as consumers become increasingly aware of data security issues.

According to the study, 88% of customers wouldn’t use the services or purchase products from an organization they distrust, while well over a third (39%) said they had lost trust in a company due to a data breach or misuse of data they have heard about.

At best, brands can expect customers to change their user settings to restrict the level of data they’re sharing. At worst, they will simply stop using the company’s services, deleting their accounts or the brand’s app from their device.

The findings are a stark reminder of the cost of data mishandling to brand reputations. While penance for data fumbles comes in the form of regulatory fines, downtime, maintenance costs, or customer compensation, the cost of losing loyal customers is really the most significant.

Interestingly, a separate survey by Varonis found that customers are more likely to shop again with established organizations after a breach, such as grocery retailers and hotels, more so than those in newer sectors such as ride-sharing. Reasons for this could stem back to better loyalty and convenience, but it could also be related to the brand’s approach to data collection in the first place.

Half of the respondents (51%) in the YouGov survey admitted to having concerns about data breaches when websites request too much personal information, suggesting that not only is prevention (and prudence) the best defense, but it’s also the best way to gain trust from new customers as well.

In a previous interview with TechHQ, managing director of the UK’s Data & Marketing Association, Rachel Aldighieri, said: “Many companies have been guilty of just getting as much data as they can because they think data can help solve all their problems when actually they can be much more strategic with data they need and really only collect the data they need and use that in a way to best serve the customer.

“And actually, we should really start with the customer’s need […]”

While the Cambridge Analytica scandal was the event that brought data privacy awareness to the consumer mainstream, the spike in cybercrime during 2020 – and increasing reliance on digital by businesses and consumers – appears to have led to a heightened awareness of the importance of digital data.

Forty-four percent of respondents have seen more media coverage on the topic; Netflix has aired documentaries like the Great Hack exploring the data use and AI-targeting powers of social networks, for example, while the ransomware attack on fitness technology company Garmin directly affected millions of users.

Customers are now handing over their data with more skepticism, and that’s especially true among the most valuable, younger generation of customers. Some 63% of 18-24-year-olds admit to having permanently stopped using a firm’s services following a breach, versus 42% of 35-44-year-olds.

“Younger age groups having a lower tolerance for poor security and privacy ethics may be unexpected by many, but in actual fact, these generations have grown up online and consequently have a good understanding of the value and impact of data loss,” commented Ben King, CSO EMEA at Okta. 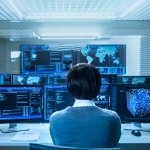 RATING YOUR ORGANIZATION FOR DATA SECURITY MEANS LOOKING OUT, AS WELL AS IN

“Young people will soon become the decision-makers of the future, so it’s important for businesses to make preparations now to ensure cybersecurity is at the heart of operations.”

Users are now actively concerned about how their data is being captured and used and have even shown that they are willing to leave massively popular platforms like WhatsApp if they feel their data is being mishandled. Such data awareness is good for the user but could be bad for companies who do not make clear which third parties may be able to access data or give clients full control over what cookies they can enable.

“Consumers are constantly discovering the information that is collected about them, how that data is used, and how daily breaches put that information at risk,” said Anurag Kahol, CTO and co-founder at Bitglass.

The answer to securing and keeping consumer trust lies in full transparency over the reason why that data is collected in the first place and how it will be protected. After that, brands simply must ensure they have the security mechanisms in place to honor their promise. And if the worst case happens, the protocols in place to manage the situation, and the willingness to be upfront to customers about it and the resolution.

Kahol concludes: “[…] to maintain consumer trust – and remain compliant with regulations – it is imperative that companies make security a top priority.”