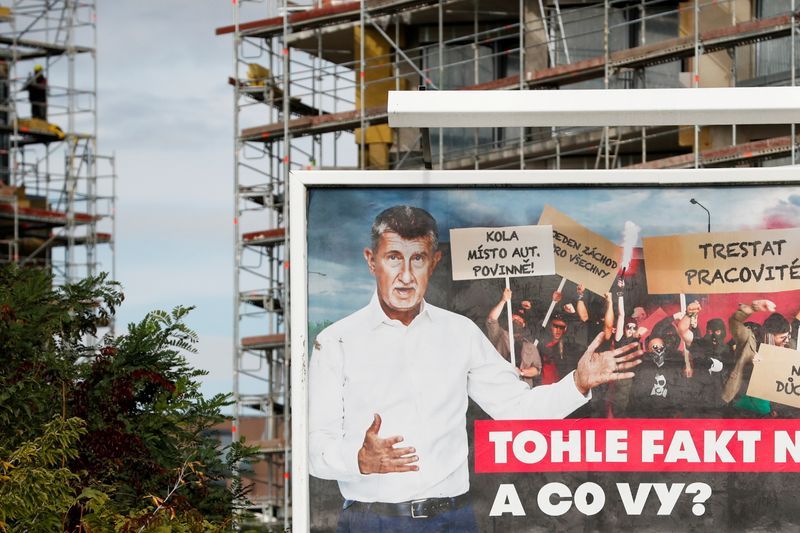 PRAGUE (Reuters) – Czechs vote on Friday and Saturday in a tight election between populist leader Andrej Babis and a group of opposition parties who blame him for running up debt, mismanaging the coronavirus pandemic and mixing his business interests with those of the country.

Babis’s centrist ANO party led in the latest opinion polls but the gap has narrowed in recent weeks to just a couple of percentage points between it and the two opposition groups who have pledged to work together to oust him.

Babis has vowed to continue raising public sector wages and pensions, policies that have benefited his main support bases.

His spending policies, which he has stuck with despite a broad recovery from the coronavirus pandemic, mark a diversion from traditional Czech fiscal prudence, and the country’s debt is set to rise at one of the fastest rates in Europe, albeit from a low base.

The centre-right Together coalition and the progressive Pirates/Mayors refuse to work with Babis due to what they say are unacceptable conflicts of interest he has as the founder of the Agrofert food, farming, chemicals and media empire employing more than 30,000 people across central Europe.

He says he met all legal obligations by putting the firms in trust funds in 2017 before he became prime minister. A European Commission audit has determined otherwise, however, and it has stopped paying development grants to the group.

Babis faced new allegations on Sunday of using opaque offshore structures to buy real estate in France before he entered politics. He has denied any wrongdoing.

The opposition also blame Babis for chaotic policy changes amid the coronavirus pandemic, which has cost the country more than 30,000 lives, one of the worst per-capita tolls in Europe.

Babis has employed anti-migrant and anti-Brussels rhetoric in the campaign, pledging to defend national interests and blaming the Pirate/Mayors coalition in particular for failing the country by supporting more European integration and the eventual adoption of the euro. The opposition includes a eurosceptic wing, however, and its European policies remain unclear.

Babis will most likely have the first shot at forming a government, but he may find it difficult to find partners, especially if the two main opposition groups receive strong turnouts in the vote and few other parties win seats.

He may try to team up with the far-right Freedom and Direct Democracy Party (SPD), despite opposing its demands to approve legislation allowing for a referendum to leave the EU.

Victory for the opposition would remove a thorn in the side of relations with Brussels by ending Babis’s conflict-of-interest spats. It would also set the Czechs further apart from regional partners Hungary and Poland, who have been at loggerheads with the EU over upholding democratic standards.

“Babis is a small fish compared with what is going on in Poland and Hungary, but he has a problem of a similar type and thus the Commission cannot go against Hungary and Poland and ignore what is going on here,” said European studies lecturer Tomas Weiss from the Charles University.

“The moment he goes, this acute problem disappears.”