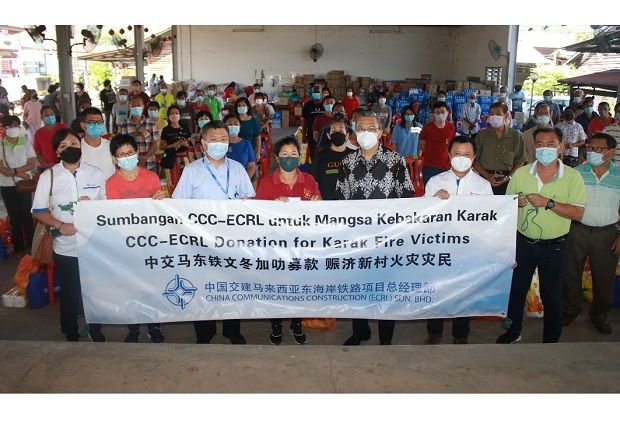 On Friday (Oct 8), it handed over a donation of RM30,000, raised through donations from its management and staff, to help the victims at Kampung Baru Cina Karak here.

The cheque was presented by the newly appointed managing director of CCC-ECRL, Kong Qi, to the Kampung Baru Cina Karak Village Development and Security Committee (JKKK).

“CCC-ECRL has always been committed to help people in need, especially those communities along the ECRL project route. The Karak fire victims are close to our hearts as one of our employees is also affected by the incident.

“We hope our small financial assistance would provide some relief and we pray that the families affected will remain steadfast in rebuilding their homes and lives,” said Kong.

Earlier on, Kong Qi, together with deputy project director-cum- chief engineer of CCC-ECRL, Deng Bo and several CCC-ECRL representatives, visited the scene to bring some cheer to the victims.

At around 9.10pm on Oct 1, more than 50 houses and 11 shops were destroyed in the fire that left more than 150 people homeless – making it one of the worst tragedies that has ever happened in Karak in the longest time.

The 665km long ECRL is a key project under the Belt and Road Initiative between China and Malaysia, and is expected to be completed by the end of 2026. The route starts at Kota Baru and ends at Port Klang, passing through Kelantan, Terengganu, Pahang, and Selangor.