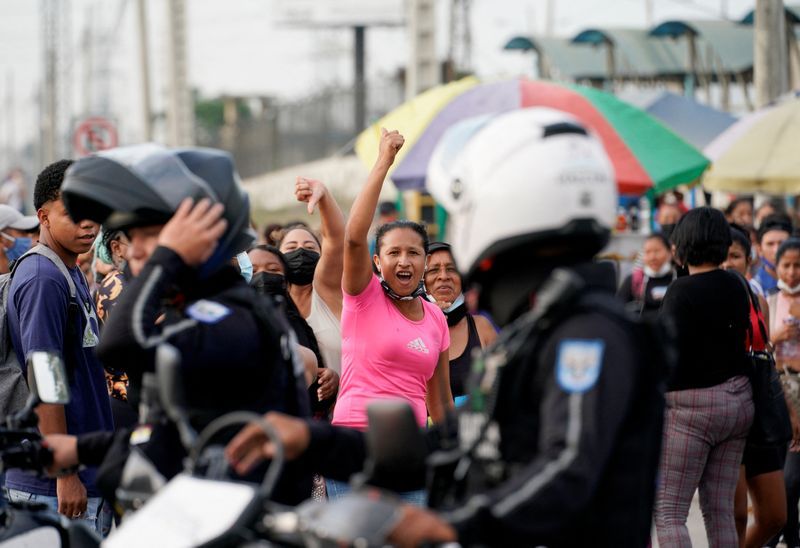 QUITO (Reuters) – Ecuadorean President Guillermo Lasso on Thursday announced an expert commission to investigate and help end prison violence that has killed more than 300 people incarcerated in the country this year.

Lasso, a conservative ex-banker, declared a state of emergency in the prison system in September, after 119 inmates died in violent confrontations at the Litoral penitentiary in coastal Guayaquil.

Another 62 inmates were killed in a November confrontation at the same jail, the nation’s most violent.

“The commission will analyze the causes and effects of the current prison situation, with an end to establishing an internal coexistence pact with dignity, humanity and responsibility,” Lasso said at the signing of a decree to create the nine-member group.

“One of the major intentions is to put an end to the mafias which dominate the prisons, allowing the voluntary hand-over of weapons and fomenting social rehabilitation,” he said. “We cannot lose more time in the face of the prison crisis.”

The group includes a human rights expert, a clinical psychologist, a criminal lawyer, a Catholic priest and an evangelical pastor, and will operate for six months.

The government has blamed the violence on power struggles between drug trafficking mafias, but the prison system has long been criticized for poor living conditions for its 38,500 residents and 30% over-crowding.

Lasso has already sent in the military to help control prisons, announced legal reforms to extend sentences for gang leaders and released prisoners with serious illnesses.

The Constitutional Court has questioned the emergency declaration and said the crisis requires sustained structural solutions.

Lasso’s efforts have changed little for Ecuadoreans and fail to confront the poverty and poor policing underlying the violence, analysts and citizens say.