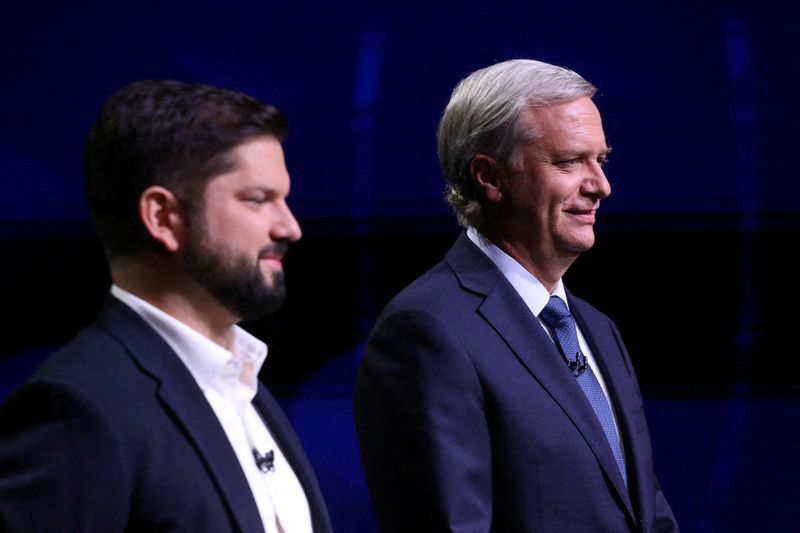 SANTIAGO (Reuters) – Chile is set to vote for a new president on Sunday, with a young former student leader Gabriel Boric on the left battling far-right conservative Jose Antonio Kast, in the most polarized election since the country’s return to democracy in 1990.

An at times heated campaign has seen Kast play up Boric’s alliance with the Andean country’s Communist Party, while Kast himself has come under fire for his defense of the dictatorship of General Augusto Pinochet that ended three decades ago.

The run-off vote is the first presidential decider since Chile was rocked in 2019 by months of angry protests https://www.reuters.com/world/americas/chile-braces-protests-crossroads-election-nears-2021-10-18 against economic inequalities that eventually sparked a process https://www.reuters.com/world/americas/how-chile-is-rewriting-its-pinochet-era-constitution-2021-05-14 – still ongoing – to redraft its decades-old constitution.

“What we’re seeing here is a debate stuck in the cold war trenches, of communism versus fascism,” said Kenneth Bunker, director of consultancy Tresquintos, who said the “virulence and polarization” could put some voters off.

HOW WILL THE VOTE WORK?

The winner-takes-all Dec. 19 election will see Chileans vote for a new president after a fragmented first-round ballot in mid-November also chose members of Congress and regional councils.

The voting starts at 8 a.m. (1100 GMT) and ballot stations close around 6 p.m., with results expected to come in fairly quickly Sunday evening.

The two candidates going head-to-head are 55-year-old ultra-right former congressman Kast https://www.reuters.com/world/americas/chiles-kast-channels-pinochets-ghost-against-communist-left-2021-12-15, who is just behind in opinion polls against Boric https://www.reuters.com/world/americas/student-leader-president-chiles-boric-eyes-historic-election-win-2021-12-15, 35, a former leader student running for a leftist coalition.

There had been seven candidates in the November first round, with votes from the more centrist runners on the right and left seen as key to deciding which way the vote will go.

Pollsters expect a close race, with Boric slightly ahead in pre-election polls since Kast came top in a fragmented first round vote. More moderate voters, the polls show, have swung to Boric more than Kast though the gap is narrowing.

However, history is potentially against Boric. Since 1999, the winner of the first round vote has always gone on to win the second round run-off.

WHAT ARE THE MAIN ISSUES?

Many Chileans support the free-market policies that propelled the copper-rich country to decades of growth and made it a bastion of economic stability in volatile Latin America. But an increasing number want change to address the deep inequalities.

Some of the loudest demands have stemmed from anger over paltry retirement payouts blamed by critics on Chile’s highly privatized pension system, while others have criticized the high costs and sometimes dubious quality of privatized education, and gaps between public and private healthcare.

Conservative voters have raised questions about increased immigration, and there are law and order concerns sparked by the protests in the capital and violent clashes between police and Mapuche indigenous groups in the country’s south.

Whoever wins the presidency will also have to handle a referendum to approve or reject the text of a new constitution during their first year in office. An assembly, dominated by leftist and independent representatives, is leading the constitution redraft.

Despite a polarized presidential race, markets took solace from the congressional result in November, with a fairly even balance between parties on the left and right likely to moderate the power of the executive branch and any radical reforms.

“(The winner) is going to have to face a Congress different from the current one, a more balanced congress, almost split in two halves,” said Marco Moreno, director of the school of government from the Central University of Chile.