When JK Joseph’s six-year-old daughter Zephanie was hospitalised during the first movement control order, he wrote a book while staying with her at the hospital.

Joseph, 58, and his wife, Eunice Teo, 45, who are from Melaka, spent three months with their daughter at the Universiti Malaya Medical Centre in Kuala Lumpur.

Zephanie was hospitalised for Crohn’s Disease (bleeding in intestines) compounded by Thrombosis (a blot clot in brain), which resulted in her having a stroke. 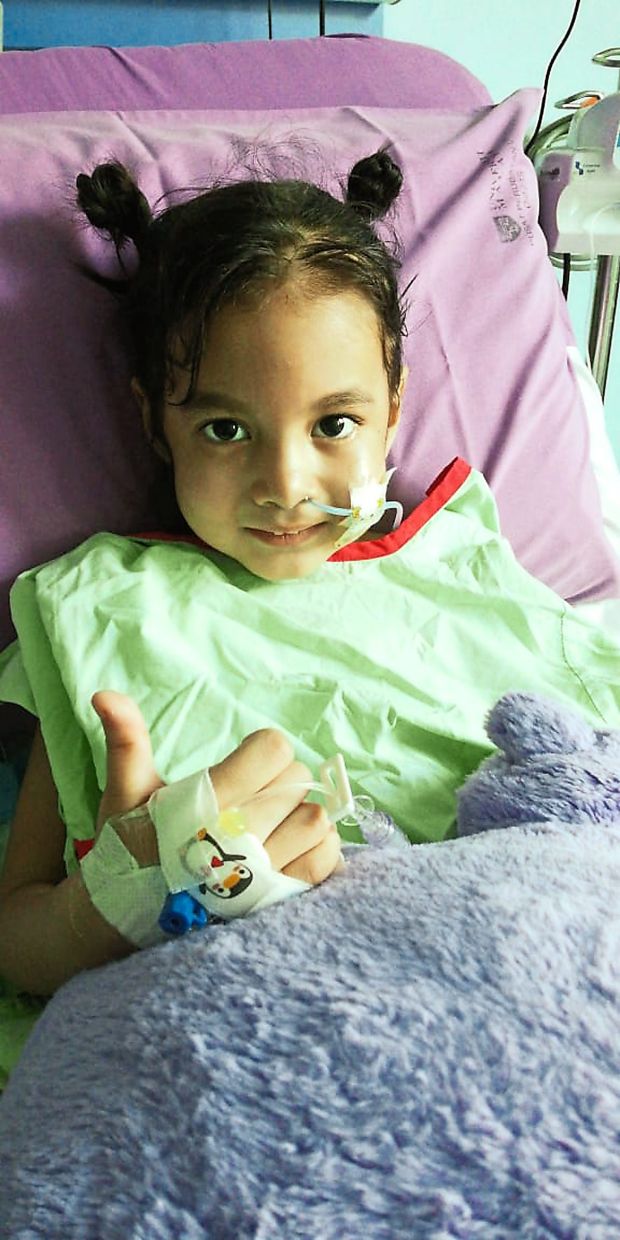 Zephanie was hospitalised for Crohn’s Disease (bleeding in intestines) compounded by Thrombosis (a blot clot in brain), which resulted in her having a stroke. Photo: JK Joseph“Zephanie was rushed from Melaka Hospital to UMMC in an ambulance and since there was a strict nationwide lockdown then (with a ban on interstate travel), we couldn’t make the journey back home to Melaka from KL, and hotels and other accommodation facilities also weren’t allowed to operate,” he says.

“So the three of us had to literally ‘stay, eat and bathe’ inside the ward for almost three months!” he adds.

“Since I couldn’t drive back home to Melaka due to the MCO, the doctors allowed my wife and I to stay with Zephanie in the ward. Because of her condition, we were provided with an isolation room with an attached bathroom,” he says.

“Most of the shops were closed during the MCO, even the launderettes so I had no choice but to wash my clothing, including my inner garments in the hospital bathroom and hang them out to dry in my car in the hospital carpark,” says Joseph.

To complicate matters, my wife and I are vegetarians so getting food close by was difficult.

“If you think being cooped up at home during the MCO is bad, then imagine having to stay, eat and bathe in a hospital ward with a seriously ill child for three months!” he exclaims good naturedly.

The property negotiator spent those nights and days at the hospital, writing a book, specifically a collection of 250 humour snippets across 126 pages, using just his smartphone.

“In a way, writing the book in the hospital ward helped to keep me in a positive frame of mind,” says Joseph.

“Zephanie is my only child and her illness was very serious. She was discharging blood in her stools day and night, and there was one day when they had to change her diapers 30 times within 24 hours and each time, it was all stained with blood” he recalls.

“So writing the book served as a diversion for me from the mental anguish I was going through,” he says. Joseph (pictured with wife Eunice and their daughter Zephanie) says that writing the book helped keep him in a positive frame of mind. Photo: JK Joseph

When asked why a book about humour, Joseph replies that he enjoys reading the jokes section in certain publications, especially in the Reader’s Digest.

“And I was also inspired by news headlines from around the world during the pandemic,” he says.

“During that time, there was a lot of negativity online, especially on social media, because of the Covid-19 pandemic. So I thought, how about I diffuse the negativity by giving these topics a humorous twist – like when how something is misspelt, it can mean something else that’s totally unexpected – and that can be very funny,” he explains.

That was how his book What Lah… We Crazy, Funny Asians! came about.

According to Joseph, the “hotpot of humour” is a simple collection of short humorous misprints, mispronunciations and wrong spellings in newspaper and magazine headlines, social media postings, advertising billboards and other sources, with a Malaysian-Asian touch to it.

“While it’s purely fiction, the book is inspired by real events, real newspaper and magazine headlines, and other sources, with a humorous twist,” he says.

A snippet from the book reads: “The following headline was spotted in an entertainment magazine ‘Bollywood heartthrob to visit Southeast Asia soon – local fans rub their hands with ghee!’ For a second I had actually thought that they were preparing chapatti or some other Indian roti to welcome their beloved celebrity. Of course, the correct word is glee.”

Joseph says that his book will appeal to those who enjoy reading some lighthearted, humorous stuff to cheer themselves up, especially during “rather bleak times” such as during the pandemic.

“I hope this will remind people, and myself, that there is always a funny flip side to everything that’s serious or negative, and it’s ok to laugh at our own mistakes because nobody is perfect,” he says.

Getting through difficult times JK Joseph credits his daughter Zephanie as his inspiration to keep on writing. Despite being ill, she was cheerful and jovial most of the time. Photo: JK JosephJoseph says that there were several things that brought the family through this difficult time.

“What brought my wife and me through all this – going through our daughter’s illness and hospitalisation, and being stranded at the hospital for three months – is our faith, and in my case, also the diversion of writing this book,” says Joseph.

He credits his daughter as his inspiration to keep on writing.

“Zephanie was the main inspiration that made me keep on writing. Even though she was bedridden, because of her bubbly character, she was cheerful and jovial most of the time, and she often even brought smiles to the faces of the doctors and nurses,” he says.

Joseph says that despite all the negativity, there are many good and positive things around them – such as the team at the hospital, and their loved ones.

“Throughout our stay at the hospital, the professors, doctors, nurses and medical staff there were so dedicated, compassionate and caring towards us, they are really angels!” he says.

“There were also so many loved ones sending us messages of encouragement everyday through WhatsApp which kept us in good spirits. It really helped us pull through,” he adds. Joseph, who hasn’t been able to earn any income these past two years due to the MCO, hopes that earnings from the sales of the book will help to subsidise his daughter’s medical expenses.

“Even though her condition has improved a great deal, we still need to drive to UMMC KL from Melaka every month for her regular antibody medication, which is done via intravenous therapy,” he says.

Currently his family has been surviving mainly on his EPF withdrawals. “In a way, it’s something that will bind the three of us together for life and remind us – in a positive way – of what we went through together as a family at the hospital,” he concludes, adding that he is writing his second book and hopes to publish it in the near future.

Joseph’s book is available via major online bookstores such as Amazon, eBay, Booktopia, and others.