Fed’s Powell: No call yet on when balance sheet would shrink 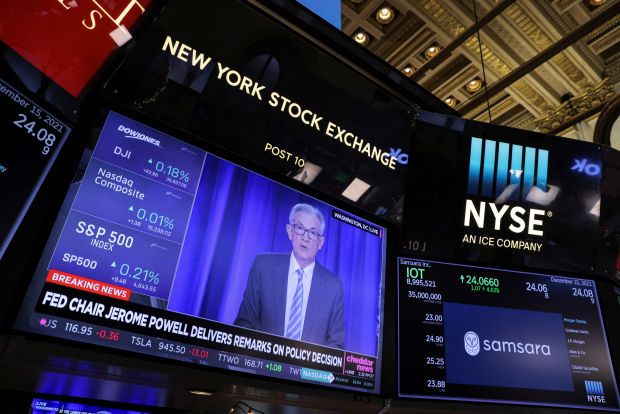 Washington: Federal Reserve Chair Jerome Powell on Wednesday said that while policymakers have decided on a swifter end to the asset purchases that have been padding its easy-money policy throughout the pandemic, they have made no decision yet on whether to start shrinking the central bank’s balance sheet.

That issue will be among the many – including whether to raise interest rates to combat stiff inflation – that the Fed will discuss in its coming meetings, Powell said at a news conference after the central bank’s latest policy meeting at which it decided to double the pace of its bond purchase “tapering” exercise.

The Fed will cease adding to its nearly $8.2 trillion stash of Treasuries and mortgage-backed securities by mid-March, about three months earlier than under the initial tapering pace announced last month.

Officials have not decided what to do about the asset holdings beyond that, Powell said. Even held at a steady level starting in March, the stockpile will still provide accommodation, he said, just not “further accommodation.”

“So (we) haven’t made any decisions at all about when run-off would start,” Powell said, but “those are exactly the decisions we will be turning to in coming meetings.”

The Fed launched the bond purchases in March 2020 when the coronavirus pandemic triggered widespread lockdowns that seized up the economy and sent key financial markets including the U.S. Treasury market into a tailspin. It opened the program with a blitz of $2 trillion of purchases in the space of a couple of months and then throttled that back to $120 billion a month starting in the summer of 2020 after markets and the economic free fall had stabilized.

Officials decided at their November meeting to start to taper those purchases in the face of inflation that is running at more than twice their targeted annual rate of 2% and indications that the job market is making substantial progress toward its maximum-employment goal. Inflation has only accelerated since then – and job market gains have persisted – prompting them to accelerate the wind-down on Wednesday.

The tapering program now under way is only the second ever undertaken by the Fed. It will wrap up in roughly half the time as the previous exercise in 2014 that had brought an end to the last of three bond-buying episodes the Fed used to help the economy recover from the 2007-2009 financial crisis.

After the 2014 taper, the Fed held its balance sheet in essentially a steady state for about three years, reinvesting the proceeds from maturing bonds. It eventually began to shrink its holdings starting in 2018 by allowing some bonds to roll off the portfolio without reinvesting the principal at maturity, a process that became known as “quantitative tightening” or “QT.”

The QT program ended abruptly in September 2019 when upheaval in a key funding market for banks and money market funds indicated that the Fed had pushed the reduction too far, and officials are keen not to see that repeated.

“We looked back at what happened last cycle and people thought that was interesting and informative,” Powell said, “but to one degree or another people noted that this is just a different situation, and those differences should inform the decisions we make about the balance sheet this time.”- Reuters