Finding the equilibrium | The Star

ALTHOUGH there have been numerous false starts for the reopening of the economy, there is an increasing belief that Malaysia is getting closer to some form of normalcy which will allow for a resumption of more economic activity.

As of Oct 7, the country has 89.1% of its adult population fully vaccinated.

Last week, Singapore announced that it has 82% of its population vaccinated.

According to the Our World Data project at the University of Oxford, more than 3.62 billion people or 47.2% of the world’s population has been vaccinated as of Oct 6.

The reduction in hospitalisation and deaths is clear that the vaccines work.

But just as important is the news of the first antiviral pill by US drugmaker Merck & Co namely Molnupiravir, could be key in the fight against Covid-19. 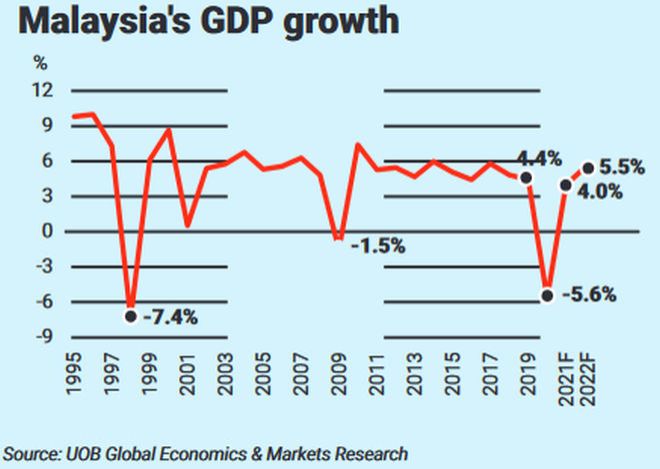 Said to be a potential game changer, it is known to reduce the risk of hospitalisation or death by about 50%.

Earlier this week, Merck & Co announced that of 385 patients who got the drug, only 7.3% were hospitalised, compared with 14.1% who got a placebo.

No death was reported in patients who received Molnupiravir in its clinical trials.

Malaysia has already struck a deal with Merck & Co to purchase 150,000 patient courses of Molnupiravir to treat Covid-19 cases.

According to Health Minister Khairy Jamaluddin, the decision to buy the new drug is made in preparation for the country’s move into the endemic phase.

“This is another weapon of choice to fight the coronavirus, besides the use of vaccines and other public health measures,” he says.

AmBank Group chief economist Anthony Dass says the antiviral pill should act like an “antibiotic” that has the possibility of quickly curing infections.

This will likely lead to fewer lockdowns, which is good for the resumption of economic activity. 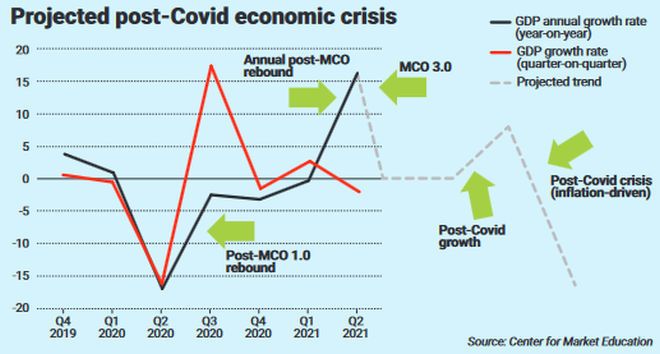 With wider availability of vaccines and medication, UOB senior economist Julia Goh says a stable and stronger economic recovery is likely to take place because there is greater assurance that the country can adapt and live with the virus. “This gives people and businesses more confidence to move forward,” she adds.

Another positive development is that the government is looking at allowing Malaysians to travel abroad in December, once 90% of its adult population is fully vaccinated. Malaysians would no longer need to apply for the MyTravelPass once the borders are reopened, but conditions for quarantine would be the same.

With the imminent green light for inter-state and foreign travel, economists expect the economic momentum to pick up in the fourth quarter of this year.

Dass, who is also a member of the Economic Action Council secretariat, says the country’s economy will recover in the fourth quarter of the year should the government’s measures, including rapid vaccination as well as strict observance of standard operating procedures (SOPs), are successful in reducing the number of Covid-19 cases.

“The economic recovery will be supported by the National Recovery Plan as it provides a clear strategy to emerge from the Covid-19 pandemic.

“The 12th Malaysia Plan or 12MP will chart the way forward for the economy post-pandemic.

“The plan has outlined a number of fundamental reforms over the next five years to rebuild Malaysia from the pandemic and to ensure the country is on track in achieving a prosperous inclusive and sustainable future,” opines Dass.

Although the recovery of the economy is underway, Malaysian Institute of Economic Research head of research Dr Shankaran Nambiar reckons that a quick rebound of economic growth is unlikely at this juncture. 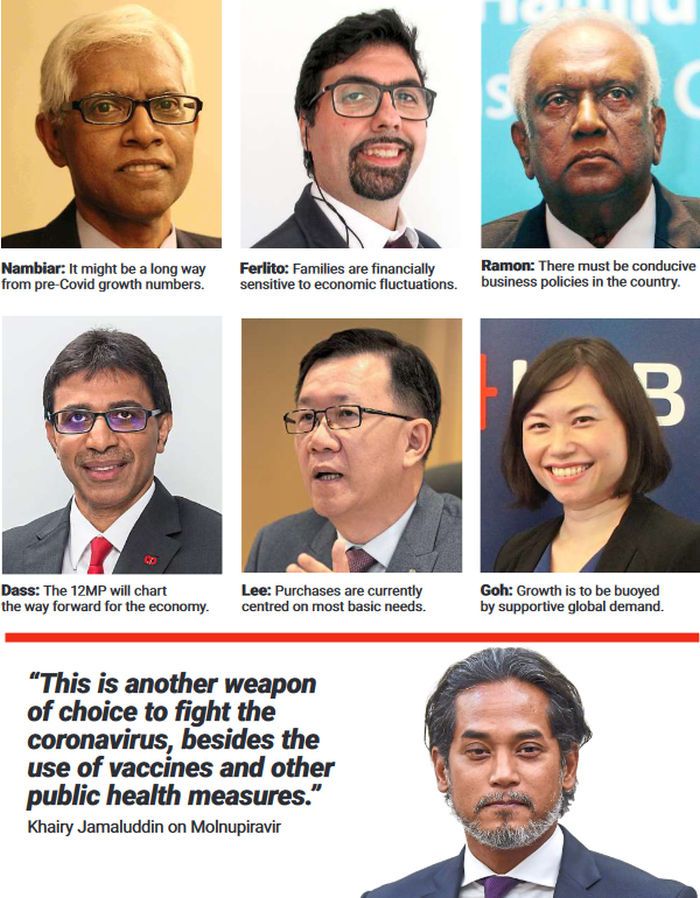 “It is unimaginable to have anything like a rebound, in the sense of a return to pre-Covid levels of economic activity in the fourth quarter. That would be unrealistic.

“A slow return is a more likely scenario, and it might be a long way from pre-Covid growth numbers,” he notes.

Economist Tan Sri Ramon Navaratnam echoes that view, saying that favourable business policies must be in place to keep the economic recovery momentum.

“There must be conducive business policies in the country so businesses are eager to invest and expand,” says Ramon, who is also the chairman of Asli Centre of Public Policy Studies.

What is the new normal scenario?

Many have thought that consumers would likely go on a “revenge spending” spree as the economy starts to reopen most of its sectors. No doubt, experts anticipate some surge in pent-up spending, although it would not necessarily be a spending burst.

According to Socio-Economic Research Centre (SERC) executive director Lee Heng Guie, some households have been fortunate to save money through the pandemic given the lockdowns, while others would have to repair their balance sheets through rebuilding savings.

On the back of the higher unemployment rate, he says some households are forced to change their spending behaviours with the focus on buying the most basic needs.

Lee points out the pandemic has caused a significant deterioration in the living standards of the poor, lower and middle-income households due to a combination of falling income as well as disrupted employment amid rising expenditure. Citing official figures, Lee points out that the percentage of Malaysians living below the poverty line income of RM2,208 per month had increased to 8.4% or 640,000 poor households last year from 5.6% or 405,000 households in 2019.

“Purchases are currently centred on the most basic needs,” says Lee.

Nambiar believes that the prospect of revenge spending is “inconceivable” given that many people have lost their jobs while most companies would be in the recovery phase with some facing closure.

Given that a significant part of the working population has been affected by salary cuts, Dr Carmelo Ferlito, who is the chief executive officer of the boutique think-tank Centre of Market Education, says the restoration of the spending power of the households is crucial for the long-term financial stability of the country.

“With a household debt to gross domestic product (GDP) ratio at 93.3% in 2020, Malaysian families are financially sensitive to economic fluctuations and therefore the path to recovery needs to be accompanied by policies that address these issues in terms of promoting social mobility and enhancing financial literacy,” he says.

Winners and losers amid economic recovery

As the country reopens its economic sectors and shifts away from the strategy of classifying businesses and service providers as essential and non-essential, businesses across the board will benefit.

Experts are anticipating that people would flock to holiday destinations as well as to retail outlets.

As such, Dass says restaurants alongside retail, tourism and hospitality-related sectors could be one of the first beneficiaries of a “near normal” environment.

“With these sectors allowed to reopen, it would also benefit related activities such as the car wash, electrical and electronics shops, clothing, fashion and accessory shops, goldsmiths, barbers, as well as beauty centres and hair salons,” he notes.

Goh says retail and tourism sectors are likely to see a rebound especially when inter-state travel is allowed.

“Growth in 2022 is to be buoyed by supportive global demand, transition to an endemic phase that enables higher domestic demand, resumption of infrastructure spending, and continued fiscal support,” says Goh.

However, Lee foresees a more conservative outlook on the sectors of the economy saying that the hardest-hit contact-intensive services sectors like hospitality, travel, and tourism would take some time to restore their pre-pandemic growth dynamism.

He adds that export-oriented industries will welcome a full workforce to ramp up the production to meet both the backlog and new orders, but the shortage of workers is dampening production.

Similarly in the plantation sector, Lee notes that the serious shortage of foreign workers has restrained the peak harvesting season.

He adds that the challenges of ensuring a fast recovery in the construction sector are the increasing cost of building materials and slow implementation of new identified projects under the 12MP.

Despite the ongoing challenging market operations, Goh says industry players are preparing for a safe reopening under new norms by ensuring staff vaccinations, adherence to SOPs, use of self-test kits, and conducting proper test and trace efforts.

“These measures would help to manage potential health risks that could affect businesses,” she notes.

Potential of a post-Covid crisisDespite the positive developments of the recovery in the country’s economy, Carmelo cautions that there could be another global economic crisis in the near-term.

To address the effects of the lockdowns, the government had intervened with expansive fiscal policies such as introducing various stimulus packages.

At the same time, Bank Negara has also maintained a low interest policy.

Carmelo says both the low interest rate and the fiscal policies will create inflationary pressure, leading to higher producer prices passed on to consumers at the peak of the recovery, amid rising oil prices.

“The inflationary effects created by expansive policies would become very evident when the economy restarts, which could undermine the stability of the recovery.

“If you look at the shortages and prices of raw materials, commodities and energy in the west, the trend is absolutely scary and threatening the livelihood of households with the winter coming.

“When inflation rises to the point of being dangerous and the government support will be withdrawn, then businesses will collapse, and with it there will be damages on the connected businesses,” he says.

Notably, inflationary pressure has fuelled an energy crisis in Europe where the prices of natural gas have surged due to an increase in global demand as countries re-start their economies.

Apart from this, Carmelo predicts that the global re-adjustment crisis could hit Malaysia by the end of next year or early 2023 following a recovery in the country’s economy.

“We still need to go through the post-Covid rebound first to determine the impact to the sector although it is unavoidable,” he says

To mitigate the impact, Carmelo says policy-makers would need to allow deflation to happen to restore purchasing power and rebalance the financial situation with the real economy.

“This will allow investments to be driven by consistent saving decisions and the recovery to move on to a more stable territory,” he notes.