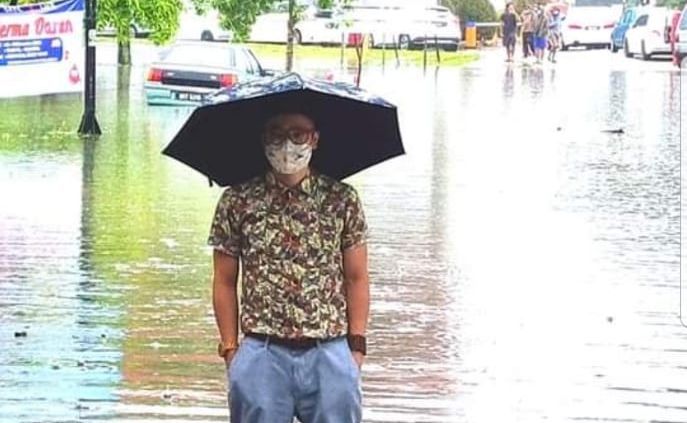 KLANG: Continued heavy rains, albeit in sporadic intervals, are preventing flood waters from receding in Klang, which is said to be facing its worst flooding in over four decades.

Most housing estates in the royal town, except those on higher ground, have been inundated since Friday (Dec 17).

To make matters worse, Klang may face double jeopardy later Saturday (Dec 18) evening, as according to the tide forecast, Port Klang will experience a high tide of up to 4.15m beginning 5.26pm.

Stationary cars were seen scattered all over Klang as drivers had abandoned them when they stalled due to floodwaters.

Kampung Raja Uda resident Emmanuel Joseph said he had gone to Port Klang to buy some breakfast at 6.30am Saturday, as the flood waters appeared to have gone down.

“The water started rising quickly all of a sudden and my car stalled,” said Joseph, adding that he had to leave his car behind and make his way home.

The tidal forecast for Port Klang also stated that the coastal area had experienced a high tide of 4.51m beginning at 5.57am Saturday.

“The whole of the Botanic area is covered in water and the heavy rain is making the situation worse,’’ said Poh, who had stationed himself near GM Klang to direct traffic away from the flooded roads.

Poh, who is also a reptile rescuer, said he had been receiving many calls of reptiles such as pythons and monitor lizards entering homes, but was unable to rescue them due to the floods.

“I received a call from a family in Kota Kemuning, saying that a huge python had floated into their home but sadly, I was unable to get there,’’ he added.

Klang’s Little India in Jalan Tengku Kelana was also not spared from the downpour’s onslaught with many of its shops inundated.

“Many shops have closed due to the flooding and business has come to a halt.

“The shops that are open are also all empty as there are no people around town,” said Little India Entrepreneurs Association Klang president Charles Manickam.

He said the Little India traders are preparing to counter further flooding as the heavy rains are expected to continue sporadically.