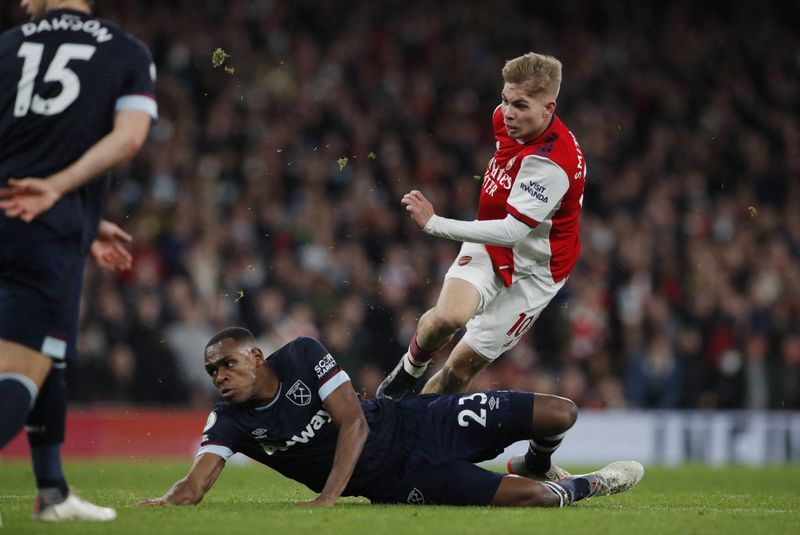 It could have been a more comfortable night for Arsenal had Alexandre Lacazette, captain for the night in place of the disciplined Pierre-Emerick Aubameyang, not had his harshly-awarded penalty saved midway through the second half.

West Ham, for whom Vladimir Coufal was red-carded after conceding the penalty, failed to produce the kind of form that has seen them stationed in the top four since October.

They huffed and puffed and threatened sporadically but home keeper Aaron Ramsdale’s only real save was from a Jarrod Bowen effort shortly after Martinelli’s opener.

Victory hoisted Arsenal up two places into fourth spot with 29 points from 17 games with West Ham on 28.

The pre-match build-up had been dominated by Arsenal’s decision to strip Aubameyang of the captaincy for another lapse of discipline. Just as in the comfortable win against Southampton at the weekend, Arsenal did not miss him.

Mikel Arteta’s side produced a vibrant second-half display after a scrappy opening 45 minutes with Lacazette outstanding.

Disappointing as they were, West Ham were justifiably angry at referee Anthony Taylor’s decision to show Coufal a second yellow card despite replays showing he had played the ball before sending Lacazette tumbling for the penalty.

A frantic opening half saw West Ham’s Craig Dawson slice the first chance of the night high and wide while the visitors went close again when Pablo Fornals curled a right-footed effort wide.

But as halftime approached Arsenal were dominating and were close to taking the lead when Kieran Tierney’s fiercely-struck shot was touched on to the crossbar by keeper Lukasz Fabianski.

Fabianski was then alert to keep out Lacazette’s shot before Dawson produced a goal-saving tackle to stop Martinelli pouncing on the rebound.

It did not take Arsenal long to take the lead in the second half as Lacazette was given too much space and time to slide a pass through to Martinelli who calmly shot past Fabianski.

West Ham were incensed when Lacazette went down under a challenge from Coufal and the referee pointed to the spot, before showing the Czech defender a second yellow card.

Fabianski saved Lacazette’s poor spot kick and as further chances went begging it seemed Arsenal might pay for their failure to finish off the visitors.

But Smith Rowe came off the bench and soon raced on to a pass by the impressive Bukayo Sako before curling home left-footed to make the points safe.