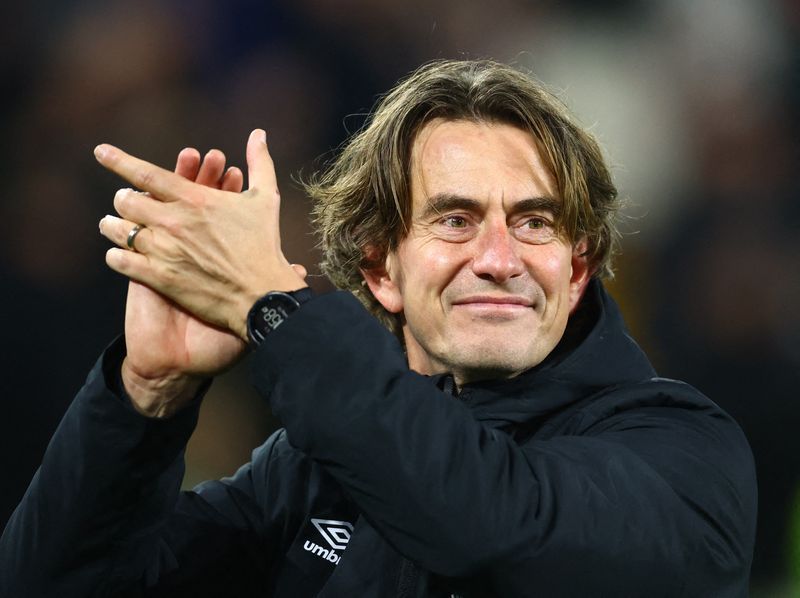 MANCHESTER, England (Reuters) – Brentford manager Thomas Frank has urged the Premier League to take a break and postpone all games in the coming week as rising numbers of COVID-19 cases continue to hit the game.

Brentford’s match against Manchester United on Tuesday was postponed after United’s training ground was closed due to an outbreak of positive cases and on Wednesday Burnley’s home match with Watford was called off after the visiting team had positive test results.

“The COVID cases are going through the roof at all Premier League clubs,” Frank told a news conference, where he said the club had 13 cases.

“Everyone is dealing with it and everyone has a problem at this moment in time.

“To postpone this round (of Premier League games) and the Carabao Cup (League Cup) would give everyone a week at least to clean and do everything at the training ground so everything is fine and we break the chain at every club,” added the Danish coach.

Brentford are scheduled to play at Southampton on Saturday and then take on Chelsea in the League Cup on Wednesday.

“We want to carry on but this way we can have Boxing Day going no problem, 100% sure of that,” said Frank. “We think that would be very sensible to do that.

“The club have been in regular contact with the Premier League over the last couple of days,” he added.

The Premier League’s policy is to address postponements on a case-by-case basis.

Leading sports cardiologist Sanjay Sharma, who is chair of the Football Association’s cardiac committee, has also called for increased vaccination among players, warning that the league could “crash”.

The Premier League last released data on vaccination levels of players in mid-October saying 81% of players had received at least one COVID-19 vaccination dose with 68% double vaccinated.

“Apparently sensible football players say ‘I don’t want to be vaccinated’. They might become ill and you’ve just seen so many clubs are crippled and games postponed. There is a massive knock-on effect,” he told the Daily Mail.

“So apart from a societal responsibility, you’ve got a responsibility to the league. If people are getting infected left, right and centre, the Premier League will crash as well,” he added.