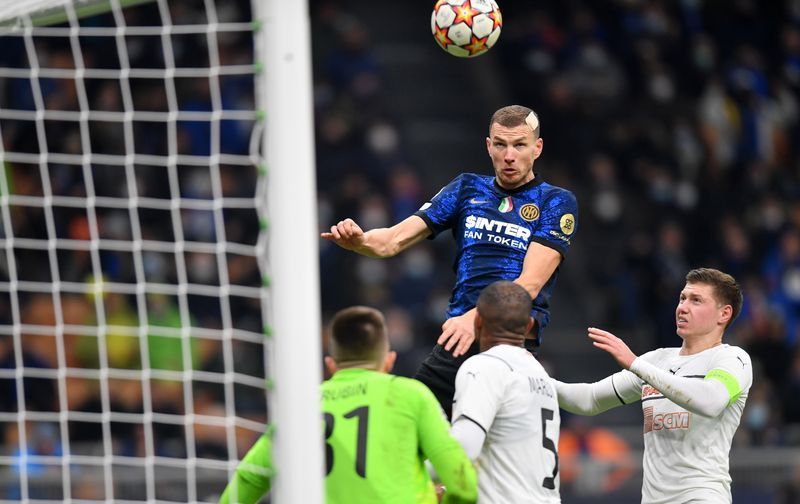 MILAN (Reuters) -Edin Dzeko scored twice in the space of six second-half minutes to earn Inter Milan a 2-0 win over Shakhtar Donetsk at San Siro on Wednesday and send the Italians to the brink of their first Champions League knockout stage appearance in a decade.

The Bosnian swept home after 61 minutes to give Inter a deserved lead after they had been left frustrated by two disallowed goals and a string of missed opportunities.

Dzeko did not need long to double his tally, heading in an inviting Ivan Perisic cross to mark his 50th goal in European club competitions.

The result sent Simone Inzaghi’s side provisionally top of Group D on 10 points and means Shakhtar, with one point, are guaranteed to finish bottom.

If Sheriff Tiraspol, with six points, fail to beat Real Madrid, on nine points, later on Wednesday, Inter will be guaranteed of a place in the last-16 for the first time since 2011-12.

The two sides are familiar with each other, having been in the same Champions League group last season too, and their last three meetings ended in goalless draws.

The Milan crowd may have feared a repeat when some big chances went begging in the first half.

Nicolo Barella fired over from a good position, Perisic had a well-taken strike ruled out for a tight offside in the build-up, and Anatoliy Trubin made three good saves, twice denying Dzeko and once Lautaro Martinez.

Inter have recorded the most first half shots in the Champions League this season, 62, but have only one goal to show for them.

More frustration followed after the break when Martinez’s volley was disallowed for a push on a defender, but four minutes later Dzeko struck from the edge of the box.

Perisic’s hanging cross to the back post gave the 35-year-old a simple task to nod in his second from close range, but Shakhtar almost brought the game back to life late on when Dodo’s angled effort thumped the post.