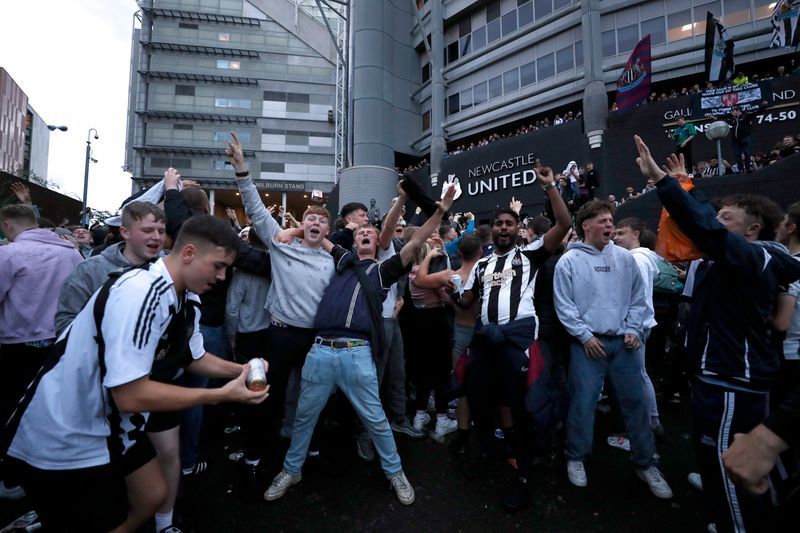 (Reuters) – Delirious fans outside St James’ Park welcomed the announcement of Newcastle United’s takeover by a Saudi Arabia-led consortium on Thursday with beer, hugs and chants of “we’ve got our club back”.

The purchase brought to an end the deeply unpopular reign of owner Mike Ashley, who had long ceased to be a fan favourite over what most saw as a lack of investment at the club.

“Yesssssssss. We can dare to hope again,” tweeted former Newcastle captain Alan Shearer, who was a vocal critic of the Ashley administration.

In a letter addressed to the new owners, the chair of the Newcastle United Supporters’ Trust, Greg Tomlinson, said that for the first time in many years fans believed that their desire for an ambitious Newcastle could now become a reality.

“We admire your desire and tenacity to buy our football club despite the protracted issues with the Premier League … we look forward to working with you to rejuvenate one of the greatest clubs in England…” wrote Tomlinson.

Other famous Geordie fans, such as TV stars Ant McPartlin and Declan Donnelly, expressed excitement at the takeover, while lifelong Newcastle supporter and podcaster Taylor Payne heralded a “new dawn” at the club.

“This is against the backdrop of a strategy by Saudi Arabia to use sports teams, athletes and major sporting events in the country to distract from its national human rights crises,” Minky Worden, director of global initiatives at Human Rights Watch, told Reuters.

“Given the Saudi Arabian government’s poor human rights record, this is a wake-up call to fans, broadcasters and players that sports should not be a tool for erasing human rights abuse.”

“We’ve sent the Premier League a suggested new human rights-compliant test and we reiterate our call on them to overhaul their standards on this.”

(Reporting by Dhruv Munjal in Bengaluru, editing by Ed Osmond)