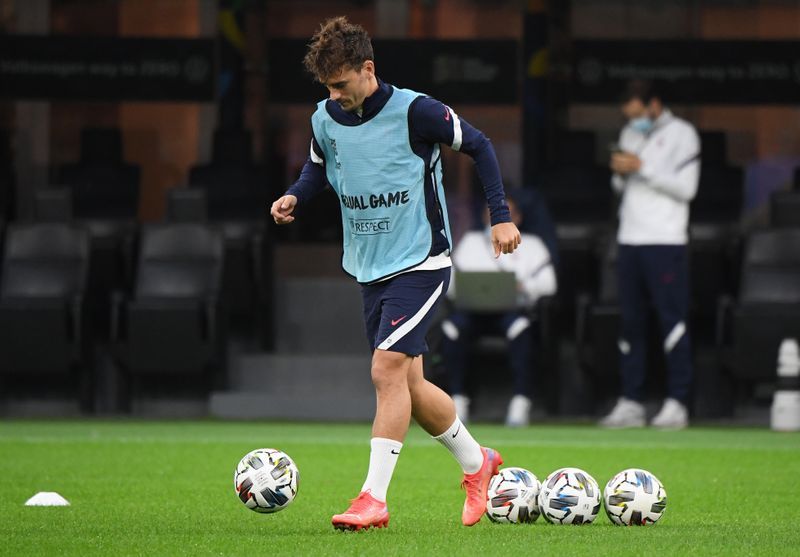 MILAN (Reuters) – France forward Antoine Griezmann will win his 100th cap in Sunday’s Nations League final against Spain and is hoping to crown it with silverware.

Spain are fitting opponents for Griezmann’s milestone match — he has spent his entire senior career in LaLiga where he is currently in his second spell with Atletico Madrid.

“It’s going to be a special night. It’s a game we have to win. There’s a trophy to lift at the end, so we’ll do everything to succeed,” he said.

“We have the right team to do it. Admittedly, a 100th cap is always quite special. The club of players with 100 caps is a very select one, so I’m very proud and hopefully the evening will end on a good note, too,” he added.

One of the eight players to have reached a century of appearances for France is Griezmann’s coach Didier Deschamps and he said the forward had become a central figure in his team.

“It is not only the total of games, look at his effectiveness, the goals, the assists. I think he has had some luck to not get serious injuries and I hope he keeps it that way,” he said.

“Maybe with me at the beginning he didn’t have a starter role, but since 2016 he has been so important to the team,” he added.

Current goalkeeper Hugo Lloris is closing in on Thuram’s record, however, with Sunday’s game his 133rd.

Griezmann will likely operate in a floating role behind the deadly strike pairing of Kylian Mbappe and Karim Benzema, who were both on the scoresheet in Thursday’s 3-2 win over Belgium in the semi-final.

“We try to find each other. For me, playing behind them both makes it easier to find them and try to put them in the best situations,” said Griezmann.

“They’re in top form, and it’s good for us when they’re in this shape as they can make a difference at any time. It’s wonderful to have such players.”