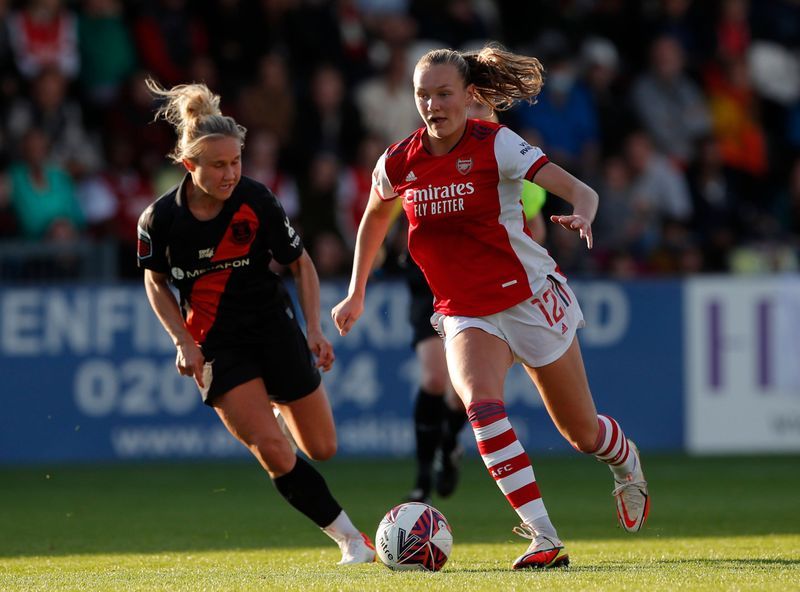 LONDON (Reuters) – Katie McCabe scored one goal and made another as leaders Arsenal remained top of the Women’s Super League table thanks to a 3-0 win over Everton, while Tottenham Hotspur slumped to their first defeat of the season, losing 2-1 to Brighton & Hove Albion.

Ireland captain McCabe belted a vicious dipping volley over keeper Alexandra MacIver in the 32nd minute, and the left back then picked out Lotte Wubben-Moy to score from a corner nine minutes later.

Everton posed little threat in attack and Frida Maanum scored the pick of the bunch for Arsenal late on, cutting inside before unleashing a right-foot rocket that burrowed its way into the top corner in the 87th minute.

Earlier in the day champions Chelsea left it late in their 2-0 win over newcomers Leicester City, with Pernille Harder making the breakthrough for the Blues in the 83rd minute and Fran Kirby adding the second deep into stoppage time.

Spurs, who started the day in second spot, conceded a goal in each half to Brighton and had forward Rachel Williams sent off for two yellow cards to slide to third in the table.

Reading got their first win of the season with a 3-0 thumping of Aston Villa, while Birmingham City picked up their first point this term thanks to a 1-1 draw with West Ham United.

Arsenal lead the league with a perfect 15 points from five games. Chelsea are second on 12 points, ahead of Spurs on goal difference, with Manchester United, who drew 2-2 with Manchester City on Saturday, fourth on 10 points.