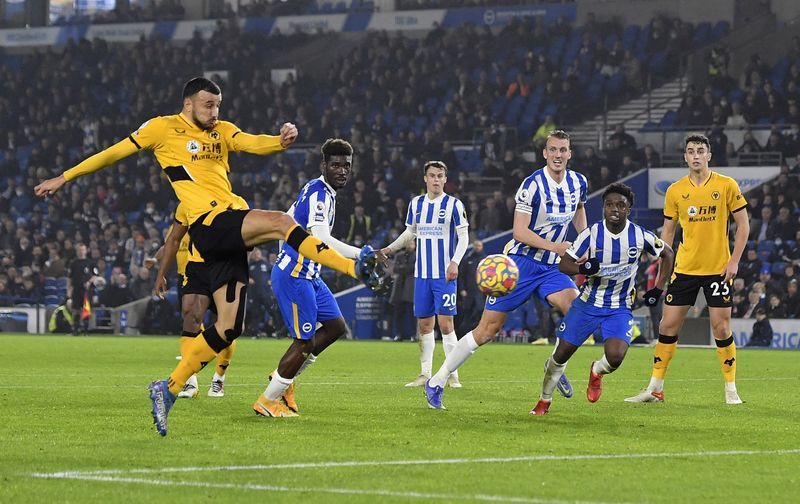 BRIGHTON, England (Reuters) – Romain Saiss struck a superb volley in first-half stoppage time to give Wolverhampton Wanderers a 1-0 win at Brighton & Hove Albion in the Premier League on Wednesday as the home side’s winless run extended to 11 league games.

Despite their squad being depleted by injuries, suspensions and COVID-19 infections, Brighton had the better chances in the first half, and the visitors suffered a blow when Korean striker Hwang Hee-Chan had to be replaced after 16 minutes.

The home side thought they had cleared the danger from a corner just before the break, but Ruben Neves chipped a beautiful ball over the defence and Saiss was on hand to score with a deft volley.

Fernando Marcal’s looping cross bounced off the top of the crossbar just after the break as Wolves upped the tempo. Brighton struggled to keep up, and Saiss almost claimed a second but his thunderous shot hit the post.

Though Yves Bissouma missed a gilt-edged chance from point-blank range, Brighton were mostly limited to pot-shots from distance in their desperate chase for an equaliser.

Wolves could have put the game beyond doubt as substitute Adama Traore orchestrated a three-on-one counter-attack, but Daniel Podence fired his drive straight at the keeper .

A problem with the referee’s communications equipment at the beginning of the second half contributed to 13 minutes of stoppage time, but Brighton barely managed to force a save from Jose Sa in the Wolves goal.

Brighton, who have not won since beating Leicester City 2-1 on Sept. 19, are 13th in the table on 20 points, with Wolves four points above them in eighth.

“I’ve known Ruben very well for a lot of years and it was a fantastic pass but I deserve credit for the finish with my right foot. I never use my right foot,” Saiss told BT Sport.

Brighton coach Graham Potter was disappointed with the goal his side conceded.

“”(The) effort was there, it’s been a difficult week for us, but not good enough tonight to get the three points,” he told BT Sport.