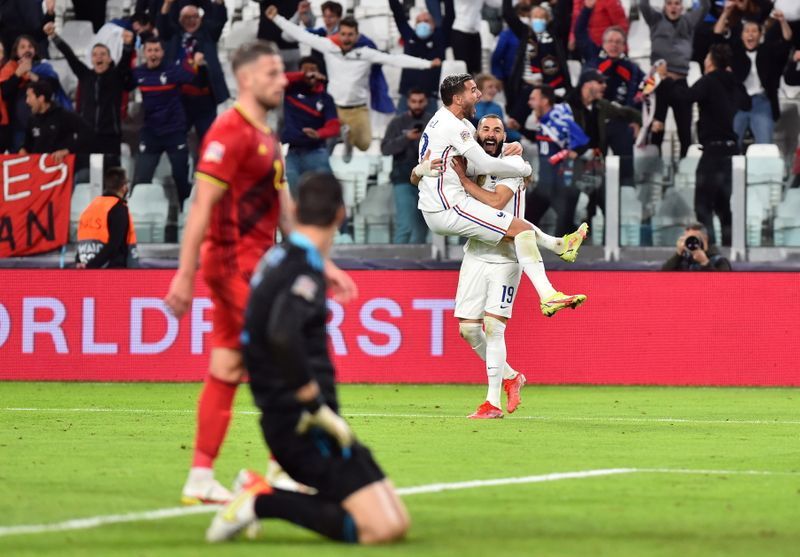 TURIN (Reuters) – Belgium’s so-called golden generation blew yet another chance to live up to their number one ranking, as they crumbled in their Nations League semi-final against France on Thursday, leaving them with just the World Cup next year to fulfil their promise.

They will not be among the favourites in Qatar, however, despite sitting on top of the FIFA rankings for the last three years, after they once again failed to live up to their potential in their 3-2 defeat in Turin.

A generation of top individual players, like Thibaut Courtois, Kevin De Bruyne, Eden Hazard and Romelu Lukaku, have given hope to a nation of some 12-million people that they would be able to punch considerably above their weight and win a major tournament.

They got to the semi-finals at the last World Cup, knocking out Brazil on the way, but lost to France in St Petersburg.

At the European Championship earlier this year, they were among the fancied teams, but were upended in the quarter-final by eventual winners Italy.

While the Nations League is regarded as a lesser prize, the Belgians had high hopes of emerging top of strong field of four in this week’s mini-tournament.

But after letting slip a two-goal lead slip against France, where their first-half display once again showed their potential, their confidence has taken a heavy knock.

“The optimism that this generation will achieve in Qatar has become a lot smaller,” said Belgian football commentator Peter Vandenbempt, reflecting the post-match sentiment across the country.

The Belgian press on Friday again raised the issue of their aging defence and focused on coach Roberto Martinez’s assertion that his players had choked with victory in sight.

“We stopped playing,” moaned Martinez. “If anything, it is the responsibility we feel to our fans and the way this generation wants to bring silverware in such a desperate manner.”

Former international Marc Degryse said it was as big a blow as losing to Italy at Euro 2020. “It is a pity this generation has thrown away a chance at a trophy in this manner. It was not at all necessary.”

Belgian soul searching is expected to continue for some time to come, even as they look ahead to Qatar.

The team is well placed to ensure qualification next month, handing them one last chance to fulfil their promise next year before time runs out on many of their international careers.