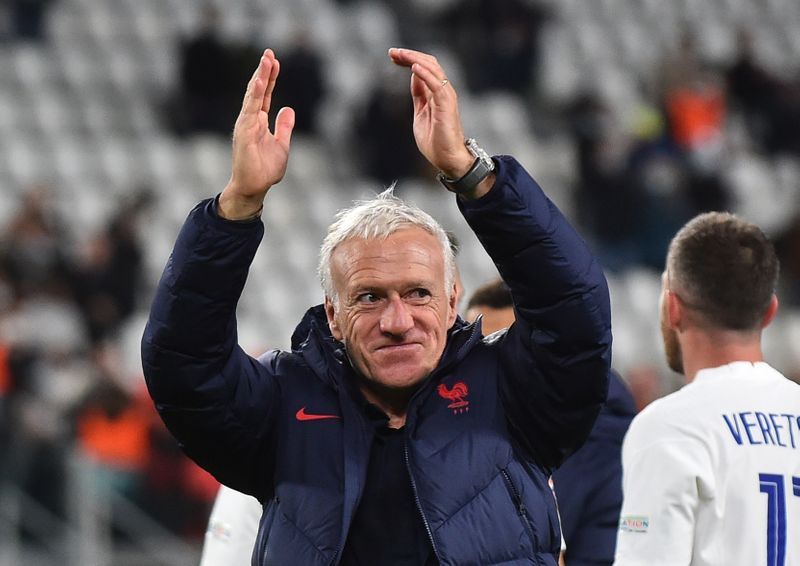 TURIN, Italy (Reuters) – France showed they were still a force to be reckoned with as they claimed an impressive 3-2 comeback win over Belgium in the Nations League after this year’s shock loss to Switzerland in the Euro 2020 last 16, coach Didier Deschamps said on Thursday.

The world champions, who struggled in consecutive draws against Bosnia and Ukraine before beating Finland in World Cup qualifiers, were on the ropes in the semi-final against the world’s top-ranked team when they trailed 2-0 at halftime.

But a spectacular reaction, culminating with Theo Hernandez’s last-minute goal, earned France a spot in Sunday’s final against Spain and gave Les Bleus some chest-bumping pride.

“We were knocked out by Switzerland (at Euro 2020) but the France national team is still here,” Deschamps told a news conference after the goals by Karim Benzema, Kylian Mbappe and Hernandez followed first-half strikes by Yannick Carrasco and Romelu Lukaku.

“We confirmed what we did against Finland, against Belgium who are the best nation in Europe, in the world. We’re still among the best teams.”

Deschamps added that the game was one of the best in his time as France coach, which started in 2012.

“It’s one of the best because of how it unfolded, because of the quality of our opponents,” he explained.

“Despite the adversity we had the pride and the character to turn it around. It is a great, great moment.”

France started well but were overwhelmed in the last 20 minutes of the first half, allowing Belgium to take what seemed to be a comfortable lead, but they suffocated Roberto Martinez’s side after the break.

“We were below our par in the last part of the first half but once we played more aggressively it was another story. The players were feeling down at halftime but it’s because we had given Belgium the opportunity to score those two goals,” said Deschamps.

“The players showed pride and character,” he added, heaping praise on the defensive work of the three attacking players – Mbappe, Benzema and Antoine Griezmann.

Mbappe, who had not scored in his six previous internationals, set up Benzema for the opener before levelling with a penalty, after missing the decisive spot-kick against Switzerland in June.

“Kylian didn’t have any doubts. He was determined after lacking efficiency at the Euros. Like I always said, the French team is better with than without Kylian Mbappe,” Deschamps said.