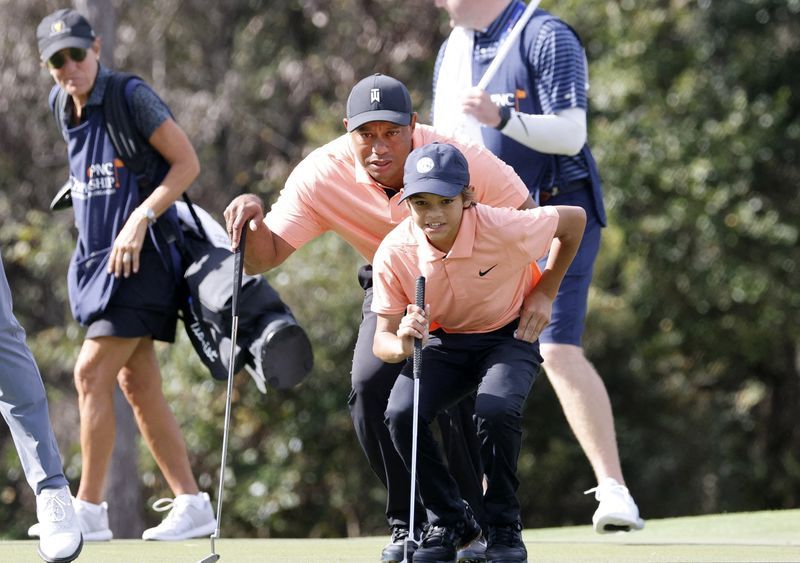 (Reuters) – Tiger Woods looked solid but not entirely pain free on his return to competition after a car crash in February shattered his leg, teaming up with his 12-year-old son Charlie to shoot a bogey-free 62 at the PNC Championship on Saturday.

Woods received a huge ovation from spectators after he crushed his tee-shot on the par-four first hole onto the fairway on a warm day at the relaxed non-PGA Tour event in Orlando.

Tiger and Charlie wore matching peach-coloured shirts and black trousers playing alongside Justin Thomas and his dad Mike at the tournament which features 19 father-son pairs and the father-daughter team of Nelly Korda and her dad Petr.

Woods has said he is a long way from being able to compete in a PGA Tour event after the one-car accident near Los Angeles 10 months ago nearly led to his leg being amputated.

He used a cart to get around the Ritz-Carlton Golf Club and looked to have a slight limp when walking. He grimaced in apparent discomfort after hitting a tee shot on the par-four 16th.

Woods, who endured four back surgeries and multiple knee operations in his career before undergoing a back fusion procedure in 2017, has not set a time frame to return to the PGA Tour but said last month he would love to play in the British Open next July.

The 45-year-old American is tied with Sam Snead for the most wins on the PGA Tour with 82, and his 15 major championships puts him three shy of Jack Nicklaus’s record of 18 major titles.