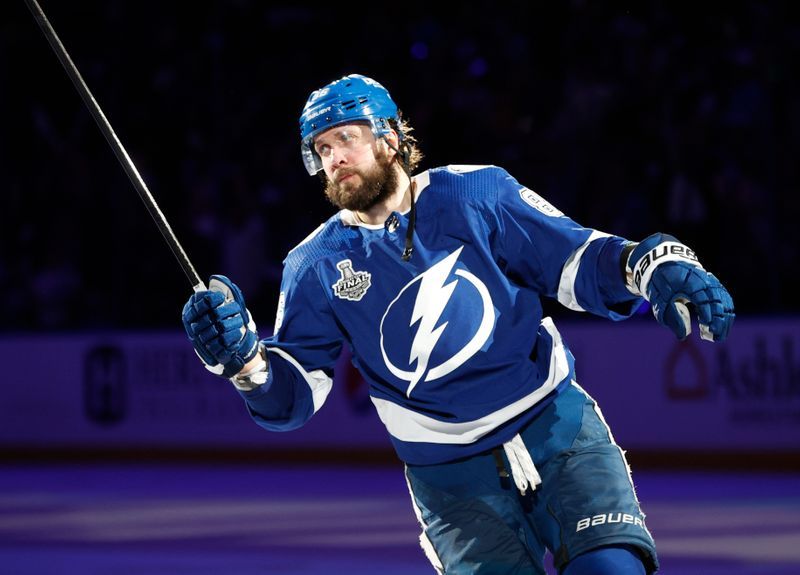 (Reuters) – The 2021-22 NHL season begins this week with most arenas back at full capacity, the Tampa Bay Lightning launching their quest to become the first team since 1983 to win three straight Stanley Cup championships and the debut of the Seattle Kraken.

The season will feel closer to normal for the NHL after COVID-19 forced the previous campaign to be shortened, played with realigned divisions in a bid to limit travel and most games taking place without fans.

While the pandemic will continue to be a challenge for the NHL, the league’s high vaccination rate among its players allows for a comparably normal season during which fans will have to follow state and local guidance on COVID-19 protocols.

Despite a significant squad turnover, the Lightning will retain the bulk of their key contributors — including Nikita Kucherov, Steven Stamkos and Andrei Vasilevskiy — that helped the team repeat as champions.

The Lightning will kick off the season on Tuesday when they raise their Stanley Cup banner to the rafters before hosting the Pittsburgh Penguins on Tuesday as part of a double-header that will be followed by Seattle at the Vegas Golden Knights.

The Kraken, named after a mythical sea creature, are the NHL’s 32nd team and are already drawing comparisons to the Vegas squad that made an improbable run to the 2018 Stanley Cup Final in the franchise’s inaugural season.

Seattle have assembled an experienced squad built around 38-year-old Mark Giordano who, as a three-time All-Star and former Norris Trophy winner as the NHL’s top defenceman, will be counted on to provide leadership.

Plenty of eyes will be on the Toronto Maple Leafs, who blew a commanding 3-1 series lead to Montreal in the first round of the 2021 playoffs when their high-powered attack fell flat.

Despite the lack of offensive firepower in the playoffs, the Maple Leafs have remained committed to their core group of forwards in Auston Matthews, Mitch Marner, John Tavares and William Nylander.

“There’s no forgetting and there’s learning to move it forward,” said Sheldon Keefe, who is entering his third season as the Maple Leafs’ head coach.

“We can recite the fact that we did a number of great things last season and we’re not here to change the foundation as we laid as a team last year.”

The Montreal Canadiens’ hopes of making a return trip to the Stanley Cup Final were dealt an early blow as goaltender Carey Price, who was stellar in Montreal’s playoff run last year, voluntarily entered the NHL’s player assistance programme.

Price entered the programme — which helps players and their families deal with issues including mental health and substance abuse — for an unspecified reason and is expected to be out for at least a month.

Some of the NHL’s best-known players are nearing milestones this season with Washington Capitals forward Alex Ovechkin 36 goals away from tying Jaromir Jagr for third on the all-time goals list (766). Pittsburgh Penguins captain Sidney Crosby is 14 goals from becoming the 46th player in NHL history with 500.

The season will include a three-week break to accommodate the participation of NHL players in the Feb. 4-20 Beijing Winter Olympics.

(Reporting by Frank Pingue in Toronto; Editing by Christian Radnedge)