In east Ukraine, a web designer learns how to ambush a tank 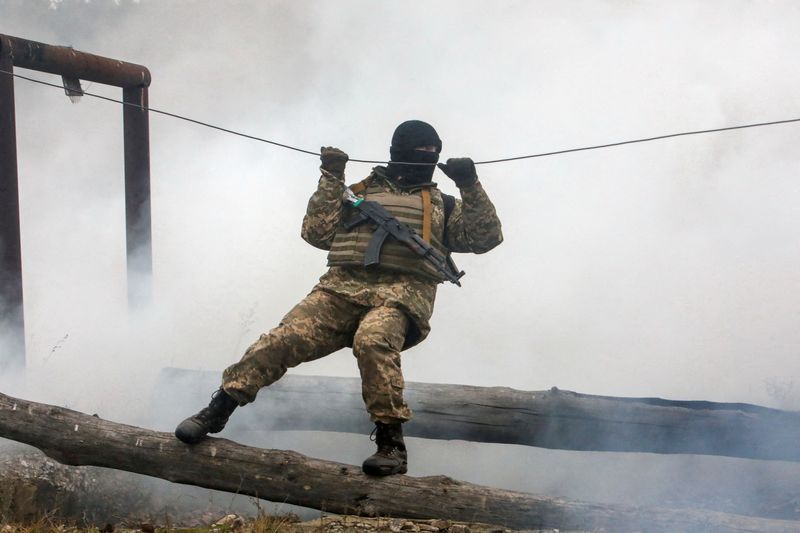 KHARKIV, Ukraine (Reuters) – Mykola Kholtobin never expected to volunteer to fight for Ukraine, but this week he found himself crouching in a fox hole and lobbing a mock grenade into a tank as part of a training exercise to prepare for a Russian invasion.

The 32-year-old web designer joined dozens of camouflage-clad reservists in the city of Kharkiv, about 25 km (15 miles) from the Russian border, to rehearse for what might happen in the event of an attack.

Kholtobin was just a baby when the Soviet Union collapsed in 1991 and was brought up speaking Russian as his first language, like millions of others in the east of then-newly-independent Ukraine.

He consciously switched to Ukrainian in 2014 when Russia seized Ukraine’s Crimea region and Russian-backed separatists launched a war with government forces in eastern Ukraine that continues to this day.

“I thought if they are using the (Russian) language as a weapon then so must I. I’d thought about it earlier but it didn’t work out. But with the beginning of the war, I ‘Ukrainianised’ myself,” he said in an interview with Reuters.

Fast-forward seven years and Ukraine is accusing Russia of massing more than 90,000 troops at the border and preparing a possible invasion. Moscow denies this, saying it has a right to move its troops around its own territory as it sees fit and that the manoeuvres are purely defensive.

Kholtobin, however, is wondering if he will need to fight for his country.

“Till 2014 I thought that the army is some kind of relic which doesn’t have its place in the modern world. Who would be fighting in Europe? What a crazy idea! But now it sounds more than real,” he said.

On the chilly training ground, members of the Territorial Self-Defense Unit stand in ranks to salute the national anthem before taking part in a series of drills: capturing an enemy combatant, evacuating a wounded colleague, applying a tourniquet to a wound.

“As for the tank – it’s not as scary as I thought it would be. I heard stories about how scary it is when the tank drives over you, but in the trench, I saw it passing above me, I reached out, I threw the grenade,” Kholtobin said.

If the situation requires it, he will turn up at the military recruitment centre near where he lives.

“I will go there and say – well I’m not a soldier but I’m ready to help you with whatever’s needed. Maybe you need somebody to load ammunition, or I have a car and I can transport the wounded,” he said.

“And of course, if they give me a gun and ask me to protect a street, or to patrol at a checkpoint, we’ve been shown on territorial self-defence drills how to work checkpoints. Whatever is needed, everything I can, I will do.”

Members of Kholtobin’s family are also pitching in – his parents and aunt are making camouflage nets for the army, and Kholtobin says he helps them from time to time.

He thinks all Ukrainians should know the basics of military training.

“I think this is a good chance to learn something useful in case something kicks off. To not just be the ballast for the country, the civilian who has to be protected, but to contribute at least somehow to the country’s defence,” he said.

“Of course I heard that there are people who say they are going to run away in case something starts. Of course I can’t guarantee that I’ll be a tough warrior, the one who will stand to the very end, but at least I don’t plan to flee.”