As the winter months near, Kashmiri beekeepers like Abid Hussain are preparing for an annual migration southward in search of warmer climes, more honey and bigger payouts.

Hussain wears protective gear on his arms and face as he readies to send his convoy of bees hundreds of kilometres from the Himalayan region into the desert state of Rajasthan.

“Everything comes to a halt in Kashmir in winter, including nature,” says Hussain, who takes his colonies 750km to vast mustard fields around Sri Ganganagar on the edge of Rajasthan’s Thar desert. Kashmiri beekeepers loading their bee colonies onto a truck in Srinagar.

Honeymakers started taking the journey in the 1980s, when an insect disease nearly wiped out the local population and a replacement European species – much more sensitive to the Himalayan cold – was introduced.

Now hundreds of millions of bees feast on rich farm crops to the south of Kashmir every year and help feed a honey-making boom for the beekeepers.

Each hive can net Hussain, who transports tens of millions of bees, as much as 9,000 rupees (RM504) worth of honey during his time in Sri Ganganagar.

While the bees get fed, the mustard farmers are happy to have their crops pollinated for future harvests. A populated bee colony is seen before being transported outside Kashmir during winter in Srinagar.

For the beekeepers, the annual pilgrimage is crucial to their survival, says Parvez Ahmad Sofi, a professor at Kashmir’s agriculture university.

“Migration saves the bees from the harsh weather, helps them reproduce colonies and produce honey,” he said.

Without it, the beekeepers have only two harvests a year, instead of four if they travel south.

As temperatures rise in February, Hussain will begin his return north, stopping for two months in the ancient city of Pathankot near the Pakistan border.

He will lease land and wait for the flowers on lychee trees to blossom in early April, allowing him one more harvest before the final journey home. 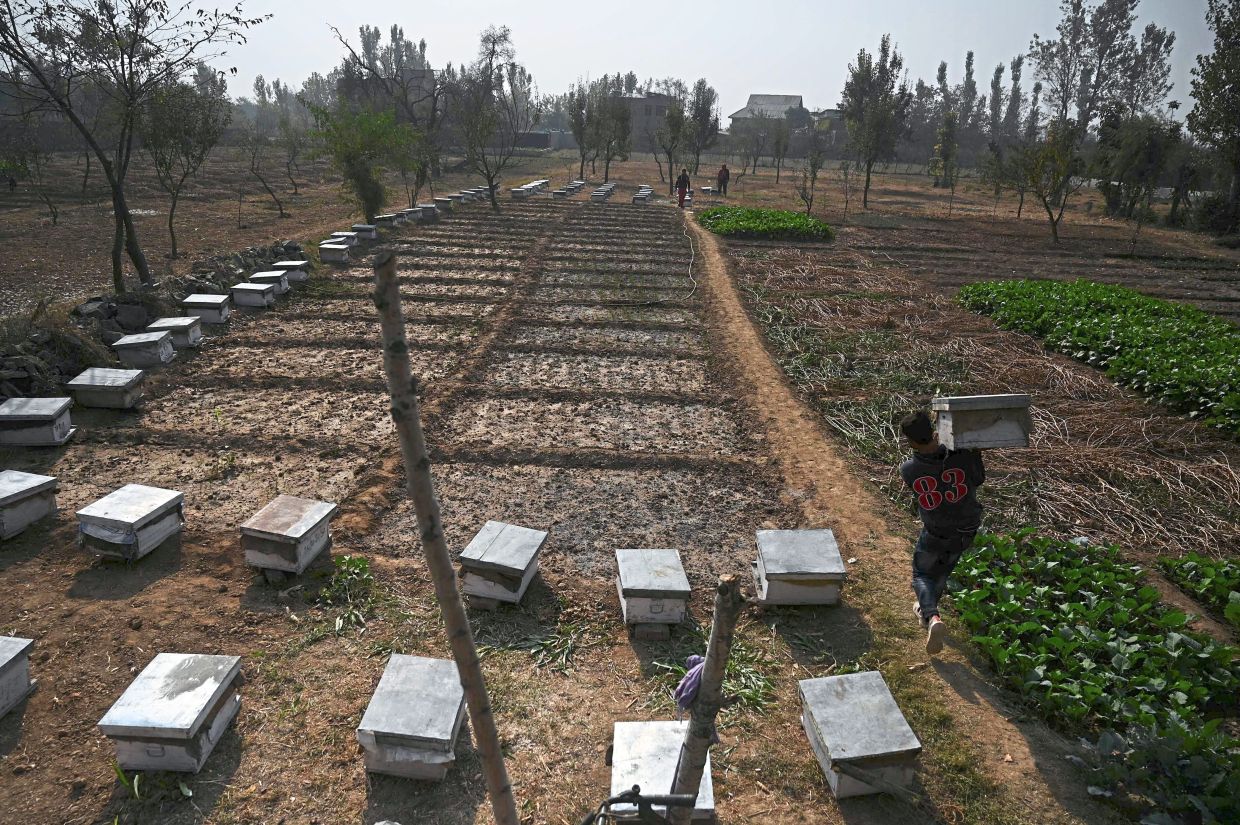 A Kashmiri beekeeper arranges bee colonies on a patch of land on the outskirts of Srinagar.

But back in the Kashmir Valley, authorities say the region’s temperatures are rising, while freak winter storms remain a threat to its wildlife.

Nearly 750 tonnes of honey were produced there last year and, while experts say the region could make more, storms, warmer winters and unpredictable rains have hit production in recent years.

Hussain says the changing climate in Kashmir makes the annual migration increasingly vital to his livelihood.

“Hot weather can destroy the flowers and the bees cannot collect nectar,” he said.

“In recent times, there has been more heat and too much rain.” – AFP Relaxnews