Lawsuit against Australia over climate risk in bonds to proceed 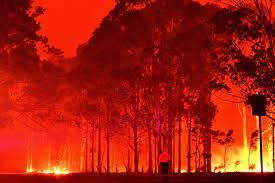 CANBERRA: A class action lawsuit that claims Australia is misleading investors by failing to disclose the impact of climate risk in its bonds will proceed after government lawyers failed to get the case dismissed.

The lawsuit may continue as a class action, but officials from the Australian Office of Financial Management and Treasury won’t be subject to the suit, Federal Court Justice Bernard Murphy said in the judgment. The government’s argument to strike out or dismiss the action based on technicalities was rejected by Murphy.

“Australia’s government has tried, but failed, to censor bond investors seeking information about climate risks,” Kathleen O’Donnell, the 24-year-old who brought the claim, said in a statement Sunday. “They can’t avoid the scrutiny of this claim, just as they can’t avoid the climate crisis.”

A spokesman for Treasurer Josh Frydenberg didn’t immediately respond to a request for comment outside of regular business hours.

Lawyers for O’Donnell and the government are to confer over the next two weeks on the case’s next steps, the judgment said. – Bloomberg