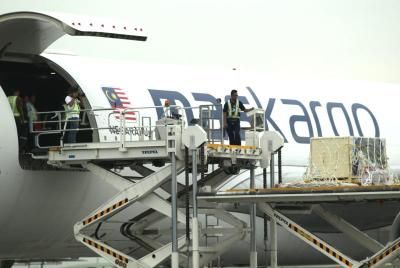 KUALA LUMPUR (Bloomberg) — Malaysia Aviation Group Bhd is weighing the sale of a minority stake in its air cargo unit to a strategic partner, according to people familiar with the matter.

The parent of Malaysia Airlines Bhd has invited banks to submit proposals as it seeks ways to expand the business, the people said, asking not to be identified because the information is private. A deal could value the unit, known as MASkargo, at more than US$1 billion, the people said.

Malaysia Aviation Group may also seek as much as US$150 million of financing for MASkargo, the people said. Discussions are at an early stage, and there’s no certainty they will lead to a transaction, the people said.

A representative for MASkargo referred queries to its parent. A spokesperson for Malaysia Aviation Group said the company doesn’t rule out the possibility of seeking strategic investors for its non-air passenger businesses to accelerate their growth, declining to comment further.

Malaysia Aviation Group is owned by the country’s sovereign fund, Khazanah Nasional Bhd. MASkargo operates its own freighter fleet and serves almost 100 destinations worldwide, according to its website.