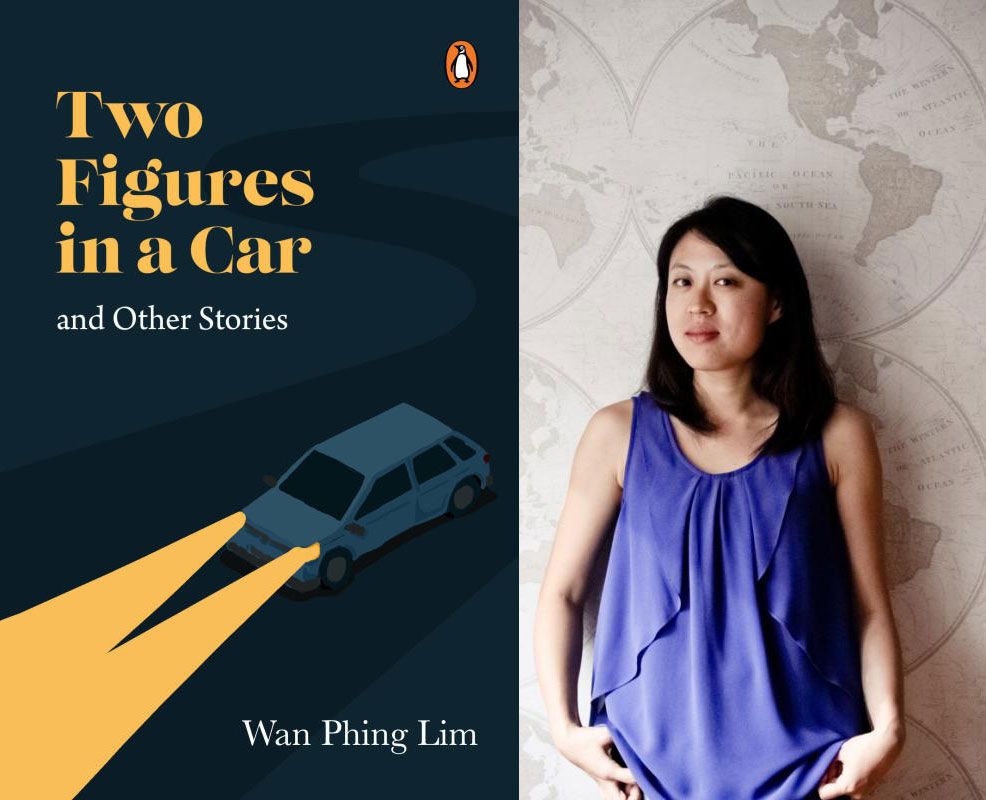 “The pond is deeper than he remembers, but the water has no colour in the dark.”

While many younger writers are attracted to frolic in the sunshine, author Lim Wan Phing finds her forte in the swirling shades of the abyss.

Her first book, published by Penguin Random House recently, is the culmination of half a decade of work and countless Saturdays spent in one cafe or another, hammering away at manuscripts.

With 14 short stories set in contemporary Malaysia and Singapore, including a short sojourn in Manchester, Two Figures In A Car explores the grey areas of ambition, poverty and, somewhat surprisingly, hope.

Delving deep into the darkened quarters that most do their best to ignore, the book peers into the quiet mansions on Pearl Hill on the northern tip of Penang, sails to the remote island of Pulau Ubin, 20 minutes and a world away from Singapore’s shores and canvasses the back alleys of Old Pier Road and Jelutong, where a dying man looks to Ti Kong, the God of Heaven.

Lim’s personal story, however, began 35 years ago in the unassuming suburb of Raja Uda in Penang.

Her parents hailed from across the strait but had moved to the mainland for work.

When she was two, the family returned to Penang island where she spent the rest of her childhood and schooling life.

“Setting plays a very important role in my stories, and I just think that an island like Penang – full of hills, beaches and temples – can be seen through a morbid lens.

“Areas like Pearl Hill and Penang Bridge in my wild imagination are filled with murder. So many accidents and suicides (have happened) on the bridge and Pearl Hill is so dark and quiet at night; something is sure to happen in one of those big bungalows,” says Lim.

The settings for her stories are places she is familiar with.

“My morbidness definitely comes from my father. He loved Black Sabbath’s debut album and the vinyl album cover was burned into my mind as a child, of a hooded figure in front of a country house.

“He loved Vincent Price and all the old British horror films. He has since passed away but, you know, the stories that a man tells will live on forever in your mind!” she adds.

Her late father Eric Lim’s lively jokes about the frangipani trees in Penang’s famous Western Road Cemetery feeding off bodies in the graves and a constant surmission that the moth that occasionally flew into their house was his late mother coming to visit were just two of several seeds for stories in Lim’s new book.

“He also used to say in the 1960s and 70s you could ride your motorbike down the sloping, hilly road from Teluk Bahang to Relau, turn off your headlights and see blackness in your rear view mirrors.

“That was supposed to be the best and scariest feeling ever and I always kept that image in my mind. I made sure that with this book cover, it reflected that noir, sloping hill, accident-is-going-to-happen-anytime kinda feel,” she explains.

Books had always been in Lim’s family, long before she was even born.

In the 1960s, her grandparents ran the Zulin Book Company, a book and school supply store on Carnarvon Road in busy George Town, the state’s capital.

Lim herself had a healthy appetite for reading growing up. Loving both Fear Street and Sweet Valley Twins, the former teenage bass guitarist (though she cringes when this part of her musical past is brought up) once told her mother that she wanted to be a writer.

“And she replied in Hokkien: Sia chek beh than lui! (Write books cannot make money!)” recalls Lim with a laugh.

Time went by and Lim went from creating poems to abandoning writing altogether in her teenage years.

After secondary school, she moved to Britain to study Politics and International Relations and hoped to be a journalist.

“Instead, I went into SEO and Marketing (in Singapore). It wasn’t until I was 28 that I wrote my first short story! That story was published and since then, I got serious about fiction writing,” she says.

Aspiring writers find out quite early that support from like-minded individuals is essential in the creative process and Lim quickly searched for a writers’ group in Singapore and joined the community.

Short stories, a genre in which Lim is famous within local writing circles, is a somewhat odd choice for a young writer.

In fact, Lim herself harbours a quiet secret about her chosen category of writing.

“This is terrible to confess, but I think I turned to short stories because I sort of ‘failed’ in writing my first novel. Somehow, I was able to find more success with getting them published.

“Slowly, I tested the waters with regards to my writing and winning competitions gave me the confidence and validation that my stories could be good. So I’ve stuck with that ever since,” she explains.

Now based in KL, Lim works as a freelance writer and editor with her fiction writing done in her off hours.

“I think there are some stereotypes about writers: they are either penniless and suffering for their art or are extremely wealthy and writing for leisure. I’m very fortunate to be able to find a job as a writer and write creatively as well.

“I have regular clients where I write marketing copy for pharma, tech, banking and NGOs. But the downside is that I sometimes don’t have the mind space to write creative fiction anymore after I write for clients,” she says.

Out of the 14 stories in Lim’s Two Figures In A Car book, 12 have been successfully previously published.

The earliest – The Red Kemboja Tree – was written in 2015 and weaves a gripping tale of two young Singaporeans desperate to bring a dying tree to bloom.

Aiming to harvest its brilliant red flower into a new perfume, the duo buy into an old Malay legend that the tree feeds exclusively on human blood.

In The Apparition, inspired by Lim’s father’s tales of riding down the pitch black hills of Penang, a young man drags a childhood friend back to the place where he hauntingly sought answers – and solace.

Meanwhile, a local housekeeping boy at a high-end beach resort rips out chunks of coveted blond hair in Goldy Gold, perhaps the most chilling tale in the collection.

“Yes, I’ve had comments that my stories are dark. I don’t think it’s intentional, it’s kinda just what comes out. It’s probably what lurks in my subconscious that I don’t talk about, am not aware of or haven’t processed, that has come out in my writing. I like to think that my earlier stories were darker and the more recent ones more hopeful,” says Lim.

With a healthy collection of published stories under her belt, Lim began shopping around for a publisher.

Rejected by several from Britain, Australia and Singapore, she dipped her finger in hot coffee the moment she received an email saying her manuscript had been accepted.

“I really wasn’t expecting it. I had read that Penguin Random House, which is American, had set up a South-East Asian office in Singapore two or three years back and that they were looking for diverse voices in the region. So, I decided to try and they said yes!” she exclaims.

Lim is still eyeing her dream of publishing a full-length novel.

“There are so many steps you must go through before you can even think about showing a novel to the world. I have two novel manuscripts buried in my drawer. I can’t bear to look at them; maybe one day when I am brave enough, I will take them out again. But most likely, I will attempt a fresh manuscript with a solid story idea,” she says.

In the meantime, Lim is toying around with ideas involving popular local deities and how they tie in with the world today.

“I think there’s a lot of potential; we have so many gods in our culture and I’m willing to explore writing in the magical realism and historical genre more.”