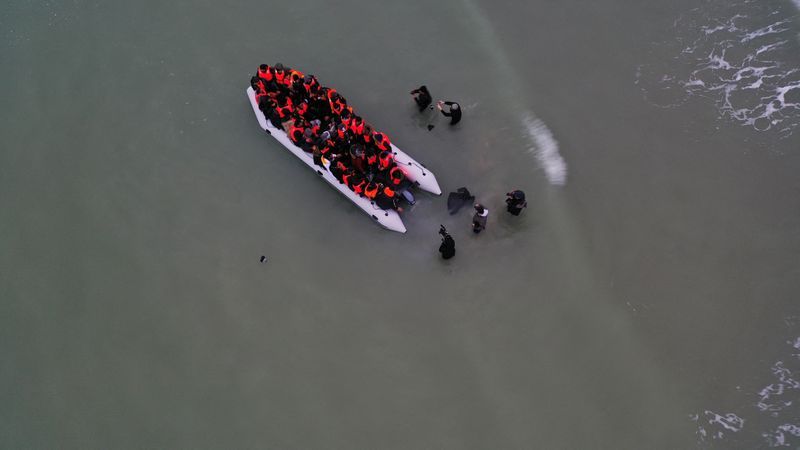 WIMEREUX, France (Reuters) – In the early hours of Thursday on a beach in northern France, a small group of police with torches tries to stand in the way of dozens of migrants heading for the sea carrying a grey dinghy.

It’s tense. The police are outnumbered. The migrants – who hope to make it to Britain on the final stretch of their long journeys fleeing war and poverty – are screaming. They eventually push past the police, who stand aside.

“Thank you, thank you,” says one woman, blowing kisses in the direction of the police.

The migrants, including children, some bundled up against the cold in jackets and woollen hats, some crying, jump onto the dinghy and head out into the Channel – one of the world’s busiest shipping lanes – towards the coast of England.

The arrival of migrants on rickety boats has been a growing source of tension between France and Britain, especially after 27 migrants drowned last month.

Britain says France is not doing enough to police its beaches, while France accuses Britain of having lax labour laws that entice illegal immigrants.

On the beach in Wimereux, near Calais, the police – about 10 – seem resigned. “They just want to go to England, that’s it,” one said of the group of mostly Kurdish migrants.

During the standoff, some of the migrants shouted: “Help us we want go to UK, please!” When a small group stepped out of the sand dunes with the dinghy, others stepped in front of the police to block their way and allow the boat to reach the water.

Some of the migrants gave up, fearing the overloaded dinghy was too risky.

A while later, another dinghy, with about 40 people on board, set out from the same beach.