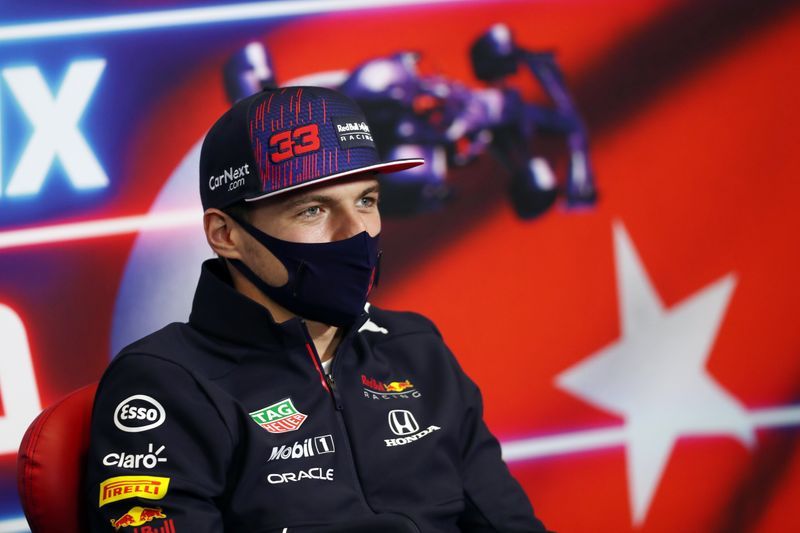 ISTANBUL (Reuters) – Formula One title contender Max Verstappen played down the pressure of fighting Lewis Hamilton for the championship and said on Thursday that the outcome would not change his life either way.

“We are very relaxed but also very focused and of course we want to win,” the Dutch driver told reporters. “There’s nothing you can force or you have to stress about because we always want to do the best we can anyway.”

Verstappen said he was not thinking about the final outcome too much.

“If that’s going to be, at the end of the year, first, that’s of course an amazing achievement and that’s what we work for, right?,” he added.

“But even if we would finish second, I think we still would have a great season and at the end of the day it’s not really going to change my life.

“I enjoy what I’m doing and I think that’s also very important. For me there is not much to worry about, really.”

Hamilton won in Istanbul last year on a wet and slippery track, while Verstappen ended up sixth, but this year’s race is a month earlier and the surface has been water-blasted to make it more abrasive.

Double world champion Fernando Alonso told reporters separately that Verstappen, who became the sport’s youngest ever race winner in 2016 at 18 years old, seemed to deal with the pressure better than others.

“It seems that for him it is not a big deal every weekend and he takes it race by race. I think that’s the right approach for these remaining races,” said the Spaniard.

Four times world champion Sebastian Vettel said it remained to be seen how it would all play out.

“If you care about something really much, it’s difficult to be always cool and always in control,” said the Aston Martin driver. “Is it helpful to be in control? I think most times yes, but I think time will tell.

“Will it change his life? He has to judge if it will or not. In the bigger scheme of things, he’s young and he has time. He’s been around five or six years now, he’s not a newcomer anymore.”