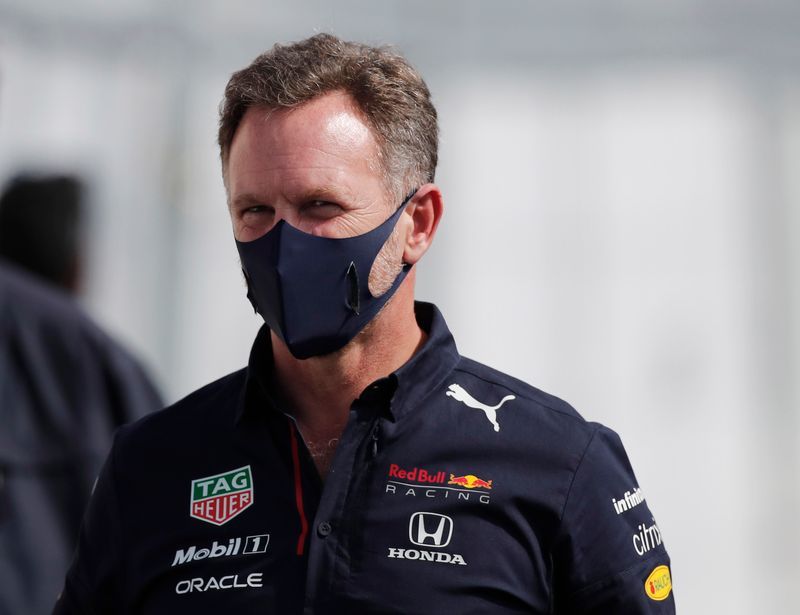 (Reuters) -Red Bull team boss Christian Horner was given an official warning after he blamed a “rogue marshal” for Formula One championship leader Max Verstappen’s grid penalty at the inaugural Qatar Grand Prix.

The Briton apologised after the race and also agreed to participate in an international stewards’ programme next February.

Verstappen was given a five-place grid penalty, dropping him from the front row to seventh, after he failed to slow for waved yellow warning flags on his flying lap at the end of Saturday’s qualifying.

Red Bull are five points behind Mercedes in the constructors’ standings.

The stewards said in a statement that the marshal concerned was “doing his job in precisely the manner prescribed in the International Sporting Code.”

Horner, who made his original comments to Sky Sports television before the race, returned to the broadcaster after the hearing to make an apology.

“I’d like to make it clear that marshals do a wonderful, wonderful job,” he said.

“They are volunteers, they do a great job. My frustration in what I voiced earlier wasn’t at marshals, it was at a circumstance.

“If any offence was taken by any individual then obviously I apologise for that.”

Horner and his Mercedes counterpart Toto Wolff have been engaged in verbal sparring for much of the season but the Briton denied he was feeling the pressure in the intensity of the championship battle.

“I think we’ve actually been pretty good with our emotions,” he said. “I haven’t been pointing and swearing at cameras and that kind of thing.”

(Reporting by Alan Baldwin in London, editing by Ed Osmond and Pritha Sarkar)