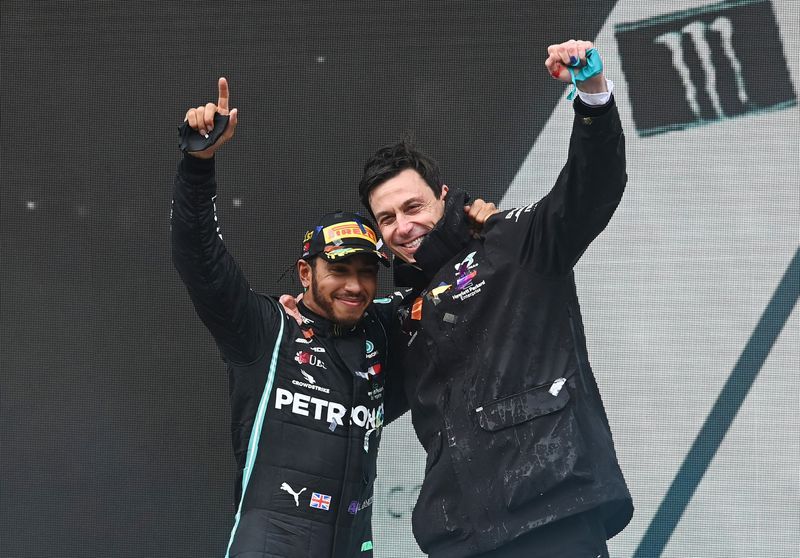 LONDON (Reuters) – Lewis Hamilton may never get over the pain of being ‘robbed’ of a record eighth Formula One title, Mercedes team boss Toto Wolff said on Thursday in comments that raised doubts about the driver’s future in the sport.

The Austrian, speaking to reporters for the first time since Sunday’s race in Abu Dhabi and after Mercedes had dropped plans to appeal, said he and Hamilton would not be attending the governing FIA’s gala awards in Paris that evening.

Attendance is mandatory for the top three drivers in the championship, with Mercedes also winning the constructors’ title for an unprecedented eighth year in a row.

Hamilton finished runner-up to Red Bull’s Max Verstappen after the Dutch driver overtook him on the last lap at Yas Marina, benefiting from a sudden change to the safety car procedure.

“It’s going to take a long time for us to digest what has happened on Sunday. I don’t think we will ever come over it, that’s not possible,” said Wolff.

“And certainly not him (Hamilton) as a driver. I would very much hope the two of us and the rest of the team we can work through the events… But he will never overcome the pain and the distress that was caused on Sunday.”

Asked directly whether Hamilton, who turns 37 in January, would be back next year, Wolff indicated that was not a certainty.

“I would very much hope Lewis continues racing because he is the greatest driver of all time,” he said.

“As a racer his heart will say I need to continue because he’s at the peak of his game,” he added. “But we have to overcome the pain that was caused upon him on Sunday. He is a man with clear values.”

Wolff said Mercedes technical head James Allison would be in Paris to collect the trophy.