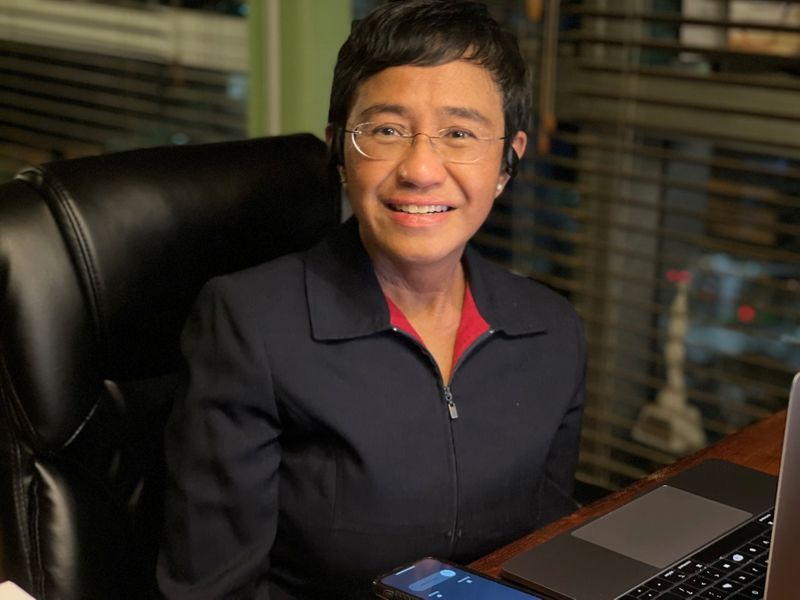 MANILA (Reuters) – Philippine Nobel Peace Prize winner Maria Ressa got accustomed to working against a backdrop of violence early in her career, having cut her journalistic teeth reporting from conflict zones.

But the 58-year-old said even that experience failed to prepare her for the torrent of threats, hatred and abuse she has faced from supporters of her country’s authoritarian president since she co-founded investigative news site Rappler in 2011.

“There were so many hate messages … Ninety hate messages an hour, 90 rape threats per minute,” the first Nobel laureate from the Philippines told Reuters in 2017.

“When I was younger I was a war correspondent. That was easier than this.”

Currently free on bail as she appeals a six-year prison sentence handed down last year for a libel conviction, Ressa expressed “shock and disbelief” on Friday after sharing the Prize with Russian investigative journalist Dmitry Muratov.

“We are caught in a battle for facts,” she said. “…I’ve never lived through anything like that, and I guess there’s justice.”

The Nobel committee said their award was an endorsement of free speech rights under threat worldwide, and Rappler has been in a legal tussle with the government to have its license, revoked https://www.reuters.com/article/us-philippines-media-idUSKBN1F40TE in 2018 for alleged violations of laws on foreign ownership, reinstated.

Rappler said it “remains 100% Filipino-owned” and its foreign investors had no say in its operations.

‘WE HOLD THE LINE’

A journalist for 35 years, Ressa launched the site after working for CNN as bureau chief in Manila and Jakarta, and then becoming the U.S. broadcaster’s lead investigative reporter in Southeast Asia, focusing on regional conflicts including an insurgency in the Southern Philippines.

She has also written two books – “Seeds of Terror: An Eyewitness Account of al-Qaeda’s Newest Center of Operations in Southeast Asia” and “From Bin Laden to Facebook”.

Rappler has grown prominent through investigative reporting, including into mass killings during a police campaign against drugs masterminded by President Rodrigo Duterte, who has labelled the site a “fake news outlet” https://www.reuters.com/article/us-philippines-media-idUSKBN1F50HL and a tool of the U.S. Central Intelligence Agency.

Since the site was launched, Ressa has had to post bail 10 times to stay out of jail in response to a string of lawsuits accusing her of everything from defamation to tax evasion, and that have stoked international concern about media harassment in a country once seen as a standard-bearer for press freedom in Asia.

Duterte’s government said it does not target news outlets for their reporting.

But Ressa, convicted of libel https://www.reuters.com/article/us-philippines-media-idUSKBN23M03B and sentenced in June last year over a 2012 article that linked a businessman to illegal activities, says the lawsuits are designed to intimidate media and promote self-censorship.

“We’re going through a dark time, a difficult time, but I think that we hold the line,” she said on Friday.

“We realise that what we do today is going to determine what our tomorrow is going to be.”