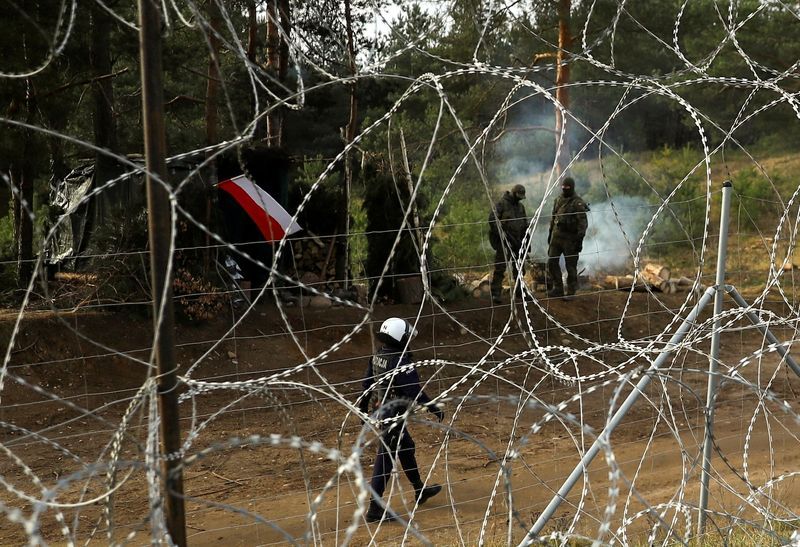 WARSAW (Reuters) – Poland said on Tuesday that groups of migrants had made new attempts to cross over the border from Belarus and it would be premature to say that the worst of the crisis on the European Union’s eastern frontier was over.

Border Guard spokesperson Anna Michalska said about 50 migrants tried to cross on Monday evening, with 18 briefly making it across the barbed wire barrier.

Another group of similar size gathered but ultimately gave up an attempt to cross at another location.

European countries have for months accused Belarus of engineering the migrant crisis by flying in migrants from the Middle East and pushing them to try to illegally cross into the EU via Poland, Lithuania and Latvia.

Belarus cleared migrant camps at the border last week and allowed the first repatriation flight to Iraq in months. About 120 migrants had left the country on Monday and more would follow on Tuesday, the Belarus interior ministry said.

But authorities in Warsaw said the further incidents at the border showed Belarusian President Alexander Lukashenko has not given up his plans to use thousands of migrants fleeing Middle East and other hotspots as a weapon in the stand-off with the EU.

“The tactics and the methods are changing and perhaps the new wave will be less spectacular…but this does not mean the situation is calming down,” Stanislaw Zaryn, a spokesperson for Poland’s special services, told a news conference.

“There are repeated attempts to cross the border and they will continue.”

Polish authorities estimate about 10,000 or more migrants could be still in Belarus, he said, creating the potential for further problems.

Lukashenko, who denies the allegations that he fomented the crisis, has pressured the EU and Germany in particular to accept some migrants while Belarus repatriates others, a demand the bloc has so far flatly rejected.

Humanitarian agencies say as many as 13 migrants have died at the border, where many have suffered in a cold, damp forest with little food or water as a frigid winter sets in with Tuesday bringing the first snowfall since the crisis started.