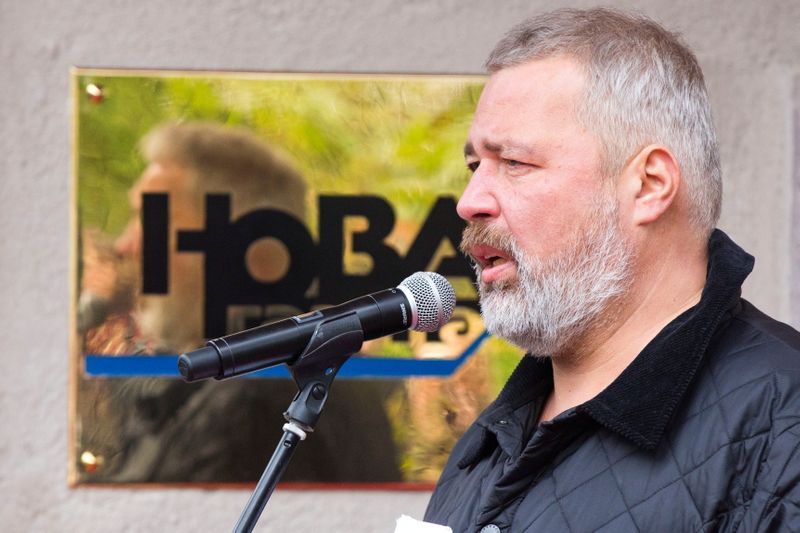 MOSCOW (Reuters) – Russian newspaper editor Dmitry Muratov dedicated the Nobel Peace Prize he won on Friday to six of of his paper’s journalists murdered for their work, and said he would try to use the award to help defend reporters under pressure.

“Igor Domnikov, Yuri Shchekochikhin, Anna Politkovskaya, Stas Markelov, Anastasia Baburova, Natasha Estemirova – these are the people who have today won the Nobel Prize,” Muratov said, reciting the names of six slain journalists or contributors to the paper whose portraits hang in its headquarters.

“We will leverage this prize in the interests of Russian journalism which (the authorities) are now trying to repress,” he told Podyom, a journalism website.

Referring to a law that forces some reporters to register as foreign agents, he said: “We will try to help people who have been recognised as agents, who are now being treated like dirt and being exiled from the country.”

Muratov was awarded the Nobel Prize on Friday along with Maria Ressa, a journalist from the Philippines, in what the committee described as an endorsement of free speech rights in jeopardy around the world.

Novaya Gazeta said Muratov would donate part of his prize winnings to a charity that helps children with rare and serious diseases.

The decision to award the Nobel peace prize to Muratov comes at a time when the authorities have moved against Russian media they view as hostile and foreign-backed. Muratov said he had thought the call from the Norwegian prize committee was spam and had therefore not taken it.

Muratov, 59, helped found Novaya Gazeta in 1993 leaving the Komsomolskaya Pravda newspaper where he worked with a group of colleagues to set up a new publication at a time of new-found freedom in Russia after the 1991 collapse of the Soviet Union.

From the beginning, Novaya Gazeta’s mission was to conduct large-scale investigations into human rights issues, corruption and abuse of power.

Mikhail Gorbachev, the last Soviet leader and the last Russian winner of the Nobel Peace Prize, donated some of his own money from the award to help fund equipment and salaries for the paper.

Some of the journalists who worked for the paper were among the highest profile critics of President Vladimir Putin to have been killed in the last two decades, including reporter Politkovskaya and rights activist Estemirova, who both infuriated the Kremlin with dispatches from Chechnya.

Politkovskaya was gunned down in her apartment stairwell in 2006 on Putin’s birthday. Estemirova was abducted from her home in the Chechen capital Grozny and murdered in 2009.

Muratov edited the newspaper for more than two decades between 1995 and 2017 when he stepped down, citing the exacting demands of the job. He returned in 2019 at the behest of the staff who voted for him to resume his duties.

The Kremlin congratulated Muratov on his prize.

“He persistently works in accordance with his own ideals, he is devoted to them, he is talented,” said Kremlin spokesman Dmitry Peskov. “He is brave.”