Sabah is like paradise on Earth for Malaysian and international visitors

On Sept 27, 1934, American writer Agnes Newton Keith and her British husband Harry Keith set off from the port of California for the third largest island in the world, Borneo. After 44 days, they arrived in a little town called Sandakan in North Borneo.

Agnes’ husband was the director of agriculture for the North Borneo government and had lived in Borneo for about 10 years before that. While living in Sandakan, Agnes wrote her first book Land Below The Wind in 1939, which won her an award for best non-fiction work from Atlantic Monthly, an American magazine.

The book became a hit in the Western world, which subsequently brought at lot of attention to this mysterious and largely untapped “virgin” island called Borneo.

ALSO READ: What can Malaysians see, do and eat in Kelantan and Terengganu?

Located on Earth’s vital equatorial rainforest belt, the Malaysian state of Sabah is generously endowed with a wealth of unique tourism resources, quite unlike the rest of the world.

Here you can find the highest peak in Malaysia, thick expanse of virgin forests, meandering rivers and streams, rare animal species like proboscis monkeys and sun bears, and 1,400km of pristine sandy beaches.

The Sulu Sea in the southwest of Sabah is dotted with pocket-sized coral islets glistening on the azure blue sea. This place has among the richest marine ecosystems anywhere in this world, and is famous globally as the ultimate scuba diving and snorkelling destination.

The town of Semporna is the gateway to these fairytale islands. While we were on our way to Semporna from Tawau during a trip last year, we saw many homestays – the closer we got to the sea, the more there were.

And in the vicinity of the Semporna jetty there were plenty of chalets, souvenir stores, watersports service stations and seafood restaurants. These establishments used to have brisk business before the pandemic.

The Sulu Sea has crystal clear water, with schools of tropical fish frolicking merrily. Because of the pandemic, there are hardly any tourists in Semporna today, but the breathtaking natural beauty of its islands remains untouched, quietly waiting for the day visitors would throng its beaches again.

There are plenty of seafood restaurants in Semporna that offer fresh mouth-watering marine catch, too, so be sure to savour some when you do get the chance to visit.

While waiting for our speedboat at the jetty to get to the islands, we enjoyed a glass of ice cold coffee at a nearby cafe, while marvelling at the beautiful sky and sea.

The four 500HP speedboats that ferried us to the snorkelling paradise of Mabul barely took 30 minutes. Mabul Water Bungalows, a luxurious resort, is a popular spot for the rich and famous who come from all over the world.

The glass panel on the resort’s room floor offers a dream-like view of the many lovely marine creatures – starfish, turtle, swordfish and more – swimming peacefully in the water. The turquoise waters of Mabul Island is so gorgeous.Mabul is a beautiful 30ha island surrounded by coral reefs. Tough relatively small, the island is actually inhabited by nearly 2,000 people, many of whom are form the Bajau community that live in houses built on stilts in the water.

Around the island there are several other resorts and an eye-catching oil rig homestay. Other than a plethora of unique marine organisms, the island is also known for its steep undersea cliffs, and is a convenient 15-minute boat ride away from the other world-famous diving paradise, Sipadan.

Traditionally, the Bajau folk here are made up of fishermen (many are also expert and talented free divers!). After discovering that we would be spending a night on the island, they paddled their sampan to our resort to sell us some freshly caught seafood. A large lobster costs only RM100, plus another RM25 if you ask them to cook it. Now that’s a real bargain!

During the day, we took part in various snorkelling activities. We were lucky to have been granted a special permit from the authorities to snorkel in the waters around Sipadan, which is normally reserved for professional divers.

I have been trying hard to think of the right words to describe Mabul and Sipadan, but the only thing I can come up with is this: “You’ve got to come here for a visit before you die!”

This island lies above the 2,000m sea bed of the Celebes Sea, and is known as a treasure trove of marine ecosystem, on par with the Galapagos islands and Truk Atoll (Chuuk Lagoon).

I don’t think there is any diver out there passionate about going below 300m underwater that has not heard of Sipadan. It is the place where all professional divers will try to visit at least once.

The island used to have chalets for divers to spend the night, but after a dangerous kidnapping incident in 2000 involving 21 tourists and resort staff, all chalets on the island were shut and demolished. A local post office was also vacated, leaving only marine officers’ huts and a hostel for the soldiers stationed on the island.

On the flip side of this, the island’s marine ecosystem has improved vastly and its environment is better protected, making it an even better spot for diving and snorkelling.

I was very happy that I had the privilege to fulfil my dream of swimming with Hawksbill turtles in Sipadan. 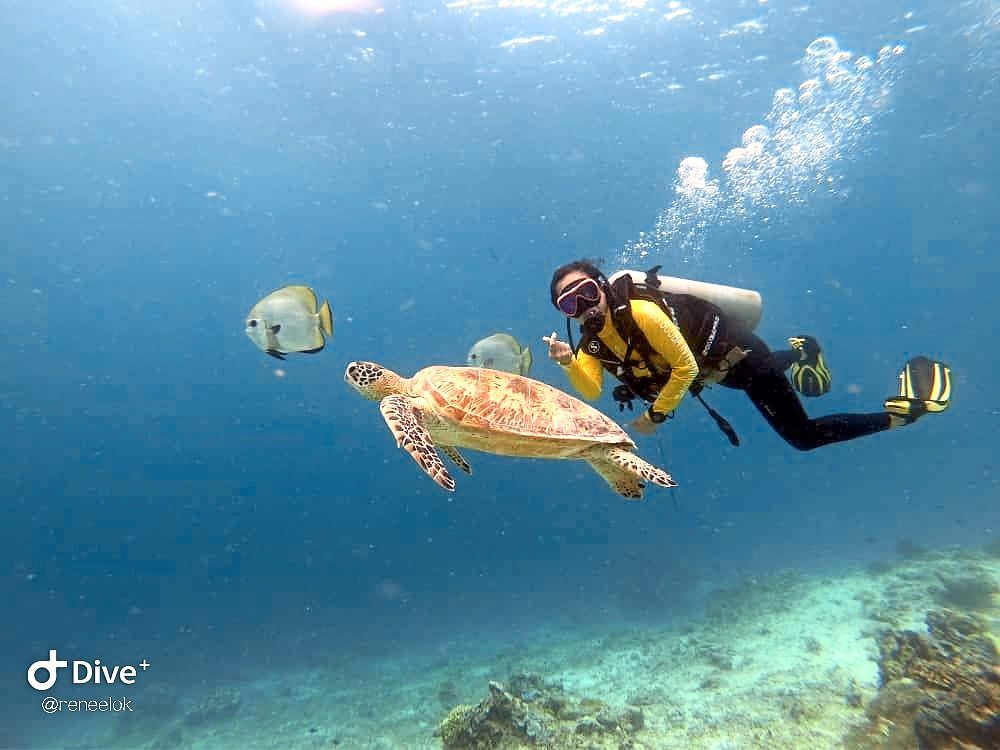 Renee, a beginner diver, was so lucky to get the chance to swim with sea turtles in Sipadan.

There are other islets to visit nearby, including Bohey Dulang, Kapalai, Mataking, Pom Pom and Timba Timba. These islands and their surrounding areas are also excellent habitats of marine creatures so you can snorkel and dive there too.

We did some watersports activities at Mabul, circling these islets on speedboats. We stopped at the breathtaking Mataking island. Standing on its white sandy beach, I looked around but did not see any of the usual tourists.

Instead, I saw some Bajau women selling coconut and other refreshments.

The natural beauty of the islands on the Sulu Sea is a great blessing to this country, and is the most valuable and freely available natural resource for our tourism industry. We must make sure that we keep these places pristine for future generations by introducing laws – and enforcing them – that can help to protect them.

The views expressed are entirely the writer’s own.

Leesan, the founder of Apple Vacations, has travelled to 132 countries, six continents and enjoys sharing his travel stories and insights. He has also authored five books.