Serbs say they will pull their region out of Bosnia’s army, judiciary, tax system 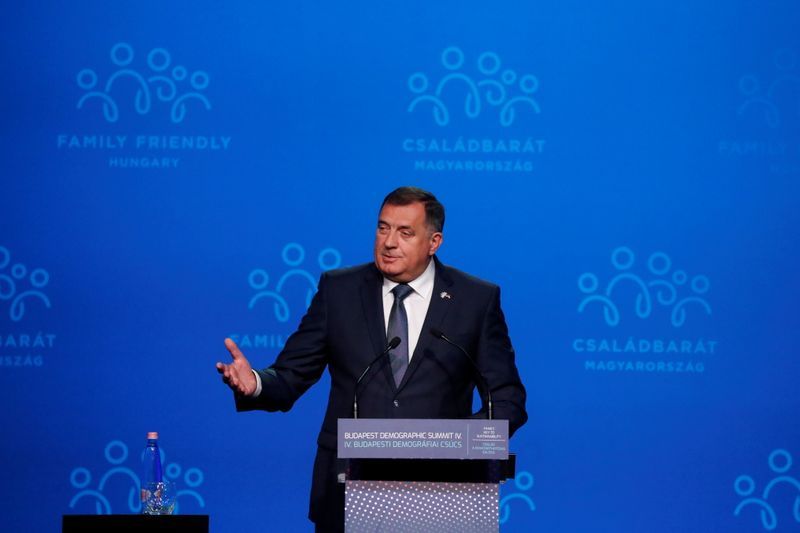 SARAJEVO (Reuters) – Bosnian Serb leader Milorad Dodik, who advocates the secession of the Serb-dominated region from Bosnia, said on Friday that the Serb Republic will pull out of the Balkan country’s armed forces, top judiciary body and tax administration.

The three institutions represent key pillars of joint security, rule of law and the economic system in Bosnia, which was divided into two autonomous regions – the Serb Republic and the Federation dominated by Croats and Bosniaks – after its 1992-1995 war in which 100,000 died and nearly 2 million left their homes.

Dodik, who currently serves as the Serb member of Bosnia’s tripartite inter-ethnic presidency, has spearheaded measures to obstruct the central government after a former peace envoy imposed a law criminalising the denial of genocide and war crimes in end-July.

“The agreement we have given for the defence law, the High Judicial and Prosecutorial Council and the Indirect Taxation Authority will be withdrawn,” Dodik said after a meeting of his SNSD party in the Bosnian Serb main city of Banja Luka.

“These decisions will be annulled. The Republika Srpska National Assembly will pass regulations and conclusions on how to regulate that,” Dodik said. SNSD with its coalition partners holds a majority in the region’s parliament.

He said several expert groups have been working on drafting the Serb Republic’s new constitution and laws on the region’s defence, judiciary and finances.

Dodik has been blacklisted by the United States for violating the provisions of the Dayton peace accords that ended Bosnia’s war. He said the moves announced on Friday will not contravene the constitution, which is part of the Dayton deal, because the three institutions were formed based on decisions by international peace envoys and not enshrined in the constitution.

He also said that Bosnia’s territorial integrity would be preserved.

Critics say the regional parliament cannot annul the decisions that were approved in state parliament.

Measures such as Friday’s announcement are deepening the political crisis in Bosnia, where decision-making has been blocked most of the time in recent years by conflicting interests of its rival ethnic leaders.

(Reporting by Daria Sito-Sucic in Sarajevo; Editing by Matthew Lewis)