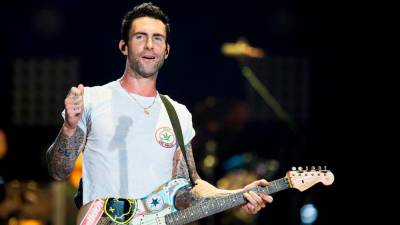 WHEN Facebook, Instagram and Snapchat shut down earlier this week, many regarded this as an opportunity to reflect upon their lives. However, Maroon 5 frontman, Adam Levine had different plans in mind.

The singer-songwriter instead saw this as an opportunity to extend his tattoo collection.

Levine took to Instagram to show off a new tattoo of a butterfly landing on a spiderweb. The fresh ink sits right above his pre-existing clavicle tattoo that reads “Family”.

On his main feed, he uploaded the photo along with the caption: “Wise man once said… ‘when Instagram goes down… tattoo your throat…’ his name was @nathan_kostechko.”

The post has garnered over 300,000 likes since its posting. Many fans have also expressed their excitement for the new ink.

Among them is Vanessa Bryant who wrote the word: “Love” and added a butterfly emoji. Her late husband, Kobe Bryant had a butterfly crown tattoo on his arm that rested above her name.

Singer Blackbear was also in awe, commenting: “I’m so mad u didn’t text me first but I f—in love it!!”

But of course, as many fans know, Levine has always had a passion for tattoos. In fact, the singer has two full sleeves on his arms and over a dozen of other designs inked across his body.

In August, The Voice coach reportedly spent two days getting a Japanese-inspired tattoo inked on his right leg. Sharing the process on Instagram, the footage was a session with the tattoo artist, Bill Canales which took him 13 hours to create the piece of art.

“Tattoos wind up being this strange road map or narrative over the years,” said Levine in a 2013 interview for his Sexiest Man Alive cover. “They always remind me of this long, weird, awesome journey life has been.”

The star also shared the details behind his first tattoo at the age of 21 – an image of a dove on his upper left bicep.

“It was five days after 9/11. I felt this needed to say something with this peaceful thing on my body.”

Aside from his new tattoo, Levine also recently debuted a new hair look. Right before the frontman got his new striking ink, Levine was seen flaunting bright blue hair as he strolled the streets of California.