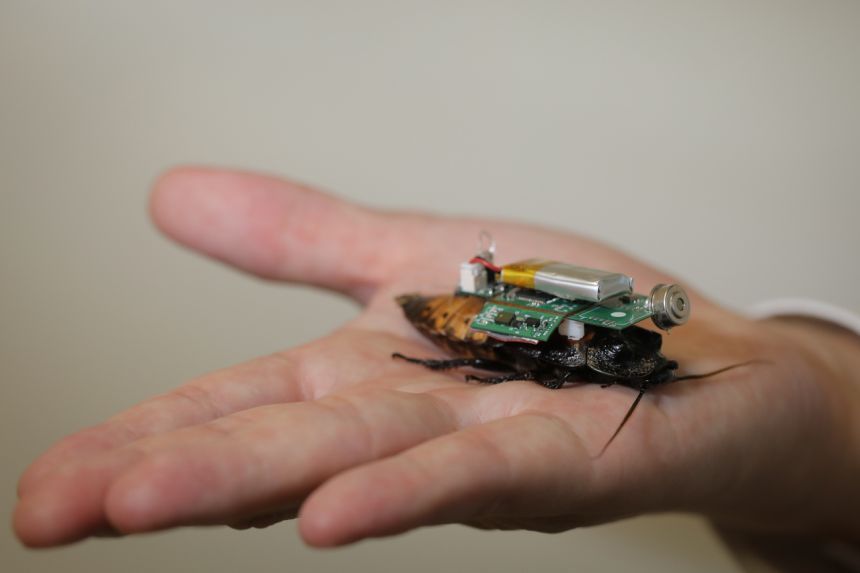 SINGAPORE: Cockroaches are known to infiltrate homes through the tiniest of gaps, and this innate ability now has engineers in Singapore working to turn the pesky insect into an ally of rescuers at disaster sites.

One variety of the insect, in particular, has the team at Nanyang Technological University (NTU) excited – the Madagascar hissing cockroach.

On average, an adult is 6cm long, 2cm longer than the local variety.

The species is large enough for Associate Professor Hirotaka Sato and his team at the School of Mechanical and Aerospace Engineering to equip the bug with a 5.5g “backpack” consisting of several sensors, including those that can warn of the presence of gases such as carbon dioxide.

The cyborg bugs also carry a small infrared camera that can detect life by picking up temperature signatures. The idea is to release a team of them at a disaster site.

Prof Sato’s research, which started four years ago, is being conducted in partnership with Singapore’s Home Team Science and Technology Agency (HTX) and engineering firm Klass Engineering and Solutions.

Using a human detection algorithm, the team found that its cockroaches, or cyborg bugs, can distinguish between human and non-human subjects with 87% accuracy.

The team estimates that roughly 500 such cockroaches are needed in a search-and-rescue area of roughly 5 sq km.

“Singapore was the first country to dispatch their rescue team to Japan when the big earthquake hit (north-east Japan) on March 11, 2011,” Prof Sato, who is from Japan, told The Straits Times, in November.

“I was awarded Nanyang Assistant Professorship in the same year and with the support from NTU, I started my cyborg robot research.

“Since then, I have been seriously motivated to use my technology to contribute to Singapore’s rescue missions.”

Prof Sato, who is currently the Provost’s Chair in NTU, has been with the university for 10 years, working in the areas of mechanical engineering, nano and micro manufacturing, as well as electrochemistry.

Ong Ka Hing, deputy director of HTX’s Robotics, Automation and Unmanned Systems Centre of Expertise, said search-and-rescue teams have to work in difficult situations in a race against time to seek out survivors.

“Deploying a team of insect-hybrid robots (or cyborgs) that can navigate small and tight spaces that may be dangerous and inaccessible to humans will protect our front-line responders and improve the agility and efficiency of Home Team operations,” he added.

Currently, HTX is also developing and refining Rover-X, which looks like a dog, to function as first responders to support the Singapore Civil Defence Force (SCDF) in such disaster rescue efforts.

Madagascar hissing cockroaches are hardy creatures that are reportedly able to withstand 10 times more radiation than humans, and live up to seven days without their heads, as they are able to breathe through the spiracles on their sides.

Between 100 and 200 of these live cockroaches are housed in containers in a laboratory room in NTU’s School of Mechanical and Aerospace Engineering.

The humidity and temperature in the containers are tailored to mimic their natural habitat. These cockroaches were imported, and take just about four months to grow to adult size.

In the latest prototype, the team first anaesthetises the insect with carbon dioxide.

Wax on the back of the cockroach is then carefully scraped off. Two electrodes and a microchip are then attached to its back.

The microcomputer in the cyborg’s backpack outputs electrical signals to the neuromuscular sites of the insect to direct its movement.

The research is in its developmental stages, with engineers working to optimise the chip and sensors.

In the pipeline is the mass manufacturing and fitting of these chips on the cockroaches.

Prof Sato said the entire manufacturing process of the cyborgs should ideally be automated and error-free.

He also hopes to incorporate the use of solar cells and biofuel cells to charge the battery, so as to extend the backpack’s operation time.

Said Cheng Wee Kiang, director of HTX’s Robotics, Automation and Unmanned Systems Centre of Expertise: “We hope to be able to deploy these cyborg insects in the field within the next five years.” – The Straits Times (Singapore)/Tribune News Service