Tunisians protest against president on anniversary of uprising 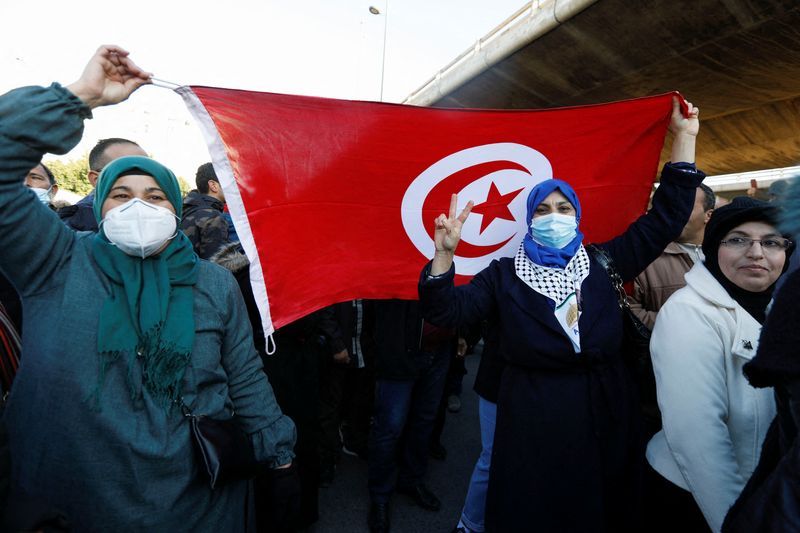 TUNIS (Reuters) – Several thousand people demonstrated against Tunisian President Kais Saied on Friday, pointing to growing opposition to his seizure of power and suspension of parliament five months ago.

Called for the anniversary of the uprising that toppled autocrat Zine al-Abidine Ben Ali a decade ago, it was the first protest since Saied announced a long-awaited road map on Monday that keeps parliament suspended for another year.

The protest suggested the road map has done little to assuage opponents who say Saied’s moves have derailed Tunisia’s democratic transition, a comparative success story of the “Arab Spring” that toppled several autocrats in 2011.

The protesters gathered in the centre of Tunis, where security forces were heavily deployed. Waving Tunisian flags, they chanted: “Freedom, freedom, the police state is over!”, and “The people want the removal of the president!”.

Three parties opposing Saied’s measures accused security forces of stopping protesters at one end of Habib Bourguiba Avenue from filing into the wide, tree-lined street that has been the location of major protests for a decade.

Issam Chebbi, secretary general of the Republican Party, said Saied supporters were, however, let through.

Saied’s plan includes a constitutional referendum next July, followed by parliamentary elections at the end of 2022.

“It isn’t a road map to exit the crisis, but to perpetuate the crisis,” said protester Jawhar Ben Mubarak, a constitutional law expert and activist in “Citizens against the coup”.‮ ‬Saied “abducted the country half a year ago and wants to abduct it for another year”, he added.

The anniversary of the uprising had previously been marked on Jan. 14, when Ben Ali fled Tunisia.

But Saied changed the date to Dec. 17, when fruit seller Mohammed Bouazizi set himself ablaze in Sidi Bouzid after an altercation with a policewoman about where he had put his cart, igniting the uprising.

Saied’s power grab initially appeared to win broad support among Tunisians fed up with years of economic stagnation and political paralysis. But opposition has sharpened, including from major domestic players who were initially supportive.