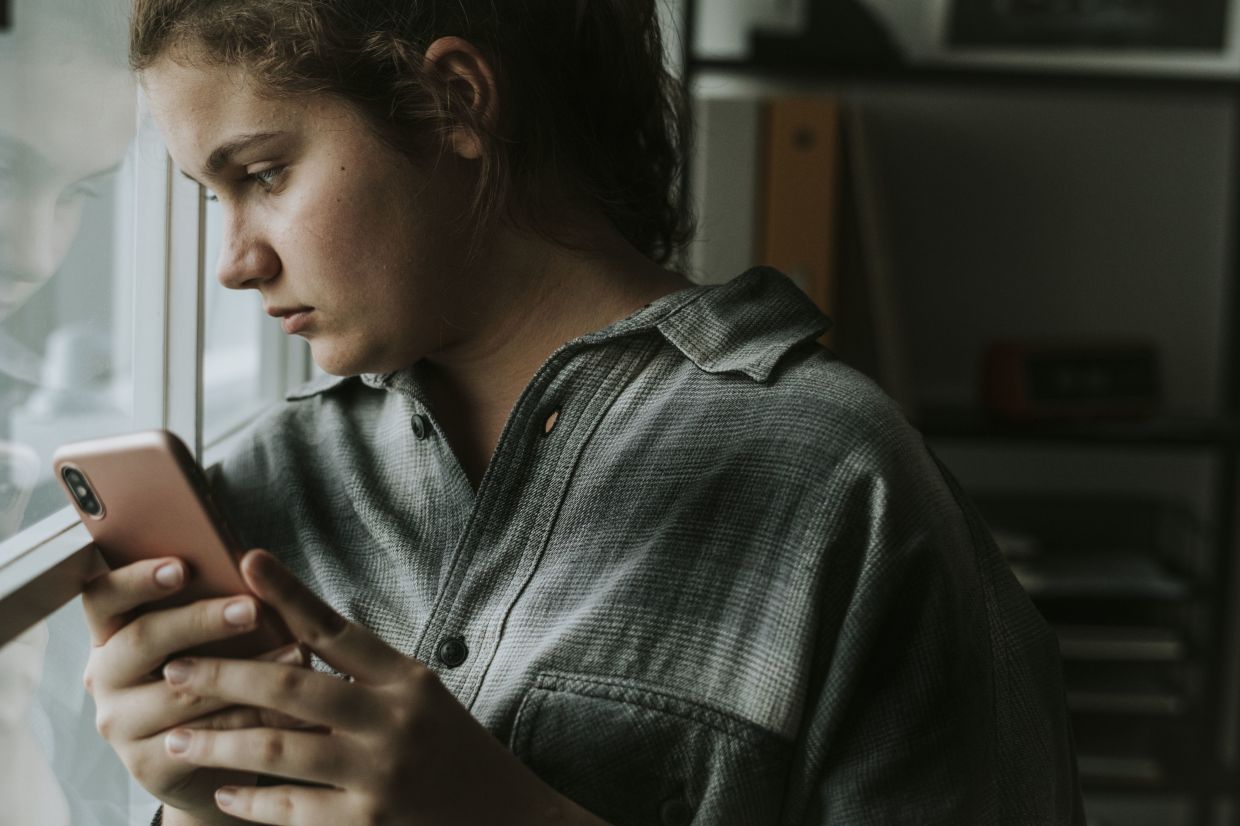 Social media is a glimpse into the minds of teenagers.

It helps to paint a full picture of the days leading up to the shooting that rocked the nation and panic that ensued in the five minutes alleged shooter Ethan Crumbley took out his gun and opened fire and how the lives of every student at Oxford High School changed forever.

The Oxford shooting left four dead and seven injured on Nov 30. Social media expanded the event’s timeline and reach, leaving a trail of warning signs, first-hand accounts and copycat threats in its wake. It provides emotional tributes and immediate support from students across the globe. It’s how teenagers — those most impacted by the tragedy — understand the world around them.

Growing up in a time where school shootings are more frequent than they should be, 19-year-old Mya Smith is all too familiar with the threats that often pop up in the aftermath. Worried about her siblings who go to high school in Canton and wanting to stay up-to-date on the newest details of Oxford, she turned to social media.

“I knew that Instagram and Snapchat would be my main go-to sources to figure out, ‘OK, is anybody near me affected by this? How can I help them out?'” Smith said. “And then, because it happened in Michigan, and so nearby to my county, I knew there was going to be somebody that knew something, and things are probably going to be updated through social media quicker than they would be on the news.”

A Free Press scouring of social media shows unveils a new perspective of the shooting and shows what needs to change before it happens again.

The Crumbley family’s social media accounts gave hints that Ethan Crumbley had access to a gun and was using it, which are now posts that prosecutors plan to use in court.

Four days before the shooting, on Nov 26, James Crumbley, Ethan’s father, purchased a 9mm Sig Sauer SP 2022 from a gun shop in Oxford. Later that day, Ethan posted a photo on his now-deleted social media of the semi-automatic handgun.

He captioned it, “Just got my new beauty today” paired with heart emojis and with the added words, “Any questions I will answer.”

The next day, his mother Jennifer Crumbley posted on social media, “testing out his new Christmas present,” in an apparent reference to her son and the gun.

At his arraignment, assistant Oakland County prosecutor Marc Keast said that a review of Ethan’s social media accounts, among other personal belongings and documents, show he “brought the handgun that day with the intent to murder as many students as he could.”

Although it’s hard to know for certain, there’s a possibility Ethan was exposed to negative thoughts or inspired to resort to violence on social media, according to expert Cliff Lampe.

Some students at Oxford texted their parents in a cry for help. Others recorded the lockdown and posted it on social media.

One student posted a now-deleted video on TikTok from inside the classroom, where the terror in the children’s voices rings loud and clear as they escape out a window from someone they believed to be the shooter pretending to be a police officer.

The Oakland County Sheriff’s Department later clarified that it was actually a law enforcement officer, not the shooter.

Whether one considers this the unintentional spread of misinformation or not, the video transports viewers inside the classroom.

Another student posted a video of them and their peers running away from the school in a TikTok that over 1.6 million people have watched.

While authorities can use school surveillance footage to watch the tragedy unfold, students, families, concerned and curious outsiders, and journalists rely on social media to give them an inside look or some semblance of an understanding of what happened.

The shooting started and finished in five minutes on Nov 30. On social media, it never ended.

In the days after the shooting, rumours of a “hit week” took off and a tidal wave of copycat rumours shut down schools in the county and state for days. Police and prosecutors are still investigating the perpetrators of the threats, often made on social media.

Oakland County Sheriff Michael Bouchard said he investigates every threat they get, but there are a lot of old, unrelated rumours making a reappearance on social media, and it causes his team a lot of effort to keep people calm about things that are untrue.

Bouchard cited an example of a “countdown clock” that was flagged to them as a threat and circulating on social media, but it was an expired promotion for a band playing at a restaurant. Other threats have been years old or talking about Oakland, California, rather than Michigan.

“That is a staggering number, and I want the message to be super clear that if you make a threat, even if you don’t intend to carry it out, that’s a crime, and we’re going to investigate it, and we’re going to hold you accountable,” he said. “We have arrested a number of people for threat since this has started…we’ve heard time and time again, ‘well I was joking,’ this is not a joke, and it will not be treated as a joke.”

People also turned right to social media for information. They wanted to know every detail about what happened, who did it and who was hurt. They wanted anything that would help them understand the inexplicable.

But social media posts aren’t verified, Lampe said, and that can lead to misinformation spreading like wildfire.

“Whatever explanation comes out first, is an explanation that they grab on to because they’re basically doing anything to reduce confusion,” Lampe said. “Especially in a crisis moment, and so it doesn’t matter sometimes if that’s a lie or a truth, it’s that it reduces that state of social psychological distress of being completely bewildered.”

Smith said that, while she looks for updates on her social media account, she knows it’s more likely rumours and firsthand accounts of situations rather than verified news, so she does her best to find the truth.

“I do think that there is kind of a necessity for you to verify information through multiple sources before taking one and running with it,” she said.

There are a few issues with this, Lampe said. One is the overabundance of pure information. The other is that it’s hard to verify what is true and what isn’t, especially when new information is consistently revealed and the facts change.

“The problem becomes, of course, once the emergency calms down and once that information intersects with what first responders need to know, which we see often in disasters, and bad information or misinformation gets out there, and there are so many people using the same channels that basically muddy the water,” Lampe said. “Then the challenge becomes, how do you verify information on the fly rapidly on social media?”

People in Oakland County, the state of Michigan and across the country care about the people of Oxford. Social media demonstrates that.

It spread the word of vigils and community gatherings, where thousands from neighbouring towns came together in a show of support and love. Hundreds more gathered after a viral Facebook post alerted them to an honour walk for victim Justin Shilling, 17, for his organ donation. From Facebook events to Instagram stories, social media allows people to communicate widely.

Those who lost loved ones turned to social media as an outlet. Whether someone posts on their “close friends” story or makes a public TikTok and lets the algorithm do its thing, messages of support are on the way.

TikToks and Instagram posts from friends and family of the four victims have garnered upwards of millions of likes and tens of thousands of comments.

One commenter on a post about victim Justin Shilling, 17, said she remembers him from 2nd grade. Another said they’ve experienced a school shooting, too.

A lot of people tend to focus on the negative aspects of social media after a tragedy, the misinformation, and the inability to control the rumour mill. Lampe said it’s important to not forget about the emotional support people can get from friends and strangers alike.

Information has always been pretty hard to control, according to Lampe, and social media is a “force multiplier.”

“A lie can get around the world before the truth can get its boots on,” he quoted Mark Twain.

Social media organisations have faced no shortage of controversies, including the recent whistleblower who said Facebook allowed hate and illegal activity, and the nationwide threats of school violence on Dec 17 that began on TikTok.

TikTok and law enforcement addressed the threats, saying they had no validity, but the lie got around the world before the authorities spoke out.

Social media likely isn’t going away, but that doesn’t mean there aren’t ways to make it more beneficial and reduce the possibility of it playing a role in encouraging mass violence, Lampe said. Right now, most social media apps base their metrics on time spent on the app, not what users are spending that time doing. This means there’s little incentive for organisations to change that, he said.

To utilise what students are saying on social media and catch early warning signs, schools should put together threat assessment teams, according to Lisa Kovach, an educational psychology professor at the University of Toledo and director of the Centre for Education in Mass Violence and Suicide.

Kovach said that these teams are not just for serious concerns, but should be in place for every mental health or behavioural issue, including weapon possession, threats, and violence, as well as peer conflict, fascination with violence and talk of violence. She noted that many who plan violent attacks often “leak” warning signs through social media, and these teams are trained to catch that.

Regardless of its impact, social media is here to stay and it is how younger generations communicate with each other and understand the world around them; and the jury is still out on whether social media is to blame for the spread of misinformation or fear.

Violence at schools happened before social media, and it will likely continue to happen as it evolves, Lampe said.

“We know that (Ethan Crumbley) communicated via social media some attempt to cause harm, but that’s not entirely uncommon,” Lampe said. “Nor was it uncommon for this to occur in other, older forms of media. It used to be bomb threats phoned into the school, and now it’s threats being on Instagram. So was the phone responsible for the threat? Or is Instagram? Maybe, maybe not.” – Detroit Free Press/Tribune News Service